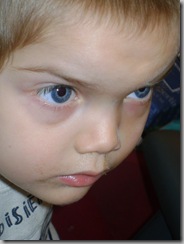 Here’s Gavriel Zev, listening in sheer concentration – turning one ear towards the speaker and staring into space – listening to Vivaldi’s “Winter.”  (eventually, I gave in to his begging and played “Spring” also)

I cannot believe how quickly the kids went from resisting Vivaldi, our second composer in the Ambleside rotation, to sheer and utter loyalty.

They fell in love so totally with Beethoven, our first composer, that I thought they’d never accept another composer in our lives.  But thanks to the 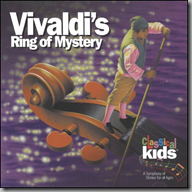 Classical Kids story “Vivaldi’s Ring of Mystery” – and also, I hope, thanks to the wonderful music itself, they quickly became fiercely loyal Vivaldi fans.

It’s like the saying in math (yes, there are sayings in math!):  “There’s no such thing as an uninteresting number.”  Every number has some unusual or useful property:  it’s prime, it’s an unusual multiple; I don’t remember all the possibilities.  But the point is that if you do come across an “uninteresting” number – well, guess what?  That is a very interesting fact about that number. 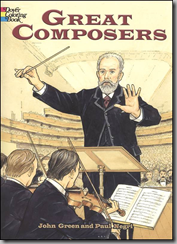 So I am becoming convinced that there are NO uninteresting composers.  You just need to find the hook:  the right interesting information to get kids fascinated.

This is one terrific tool:  the Great Composers colouring book.  You have to understand - I never buy colouring books.  This is literally the first one I have ever even thought about buying.

I consider most of them to be sheer and utter twaddle – time-wasting busywork.  My kids do very little colouring.

Still – when I went online to find a good picture to print a few weeks ago, I simply couldn’t find one.  (just checked and I did find one, but it was at a scary malware website – I hate google image search these days, because half the results are from parasitic troll websites of some kind)

So I tacked this colouring book on to our Rainbow order – kind of the same happy impulse that made me add the Classical Composers Fandex to my last order.

Anyway, Naomi loves the pictures in this colouring book!

Anyway, today, with our term of Vivaldi nearly over, we listened to the music and coloured the picture.  I think next week, we will wrap things up with a narration based on some basic facts of Vivaldi’s life (MakingMusicFun.net has printable bios) – most of which she has memorized already. 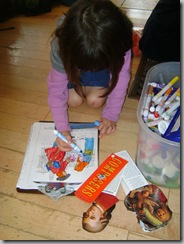 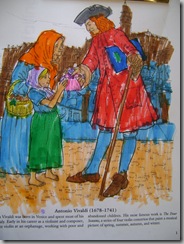 (p.s. Just looked again at the Color the Classics books and couldn’t help noticing this snippet about Felix Mendelssohn:  “Felix came to believe that Christianity was the ‘logical extension’ of Judaism.”  It also suggests that antisemitism came about because the Jews of Europe were “loyal to Judaism first and patriotic to their own nation second.”  So maybe scratch this series… drat.)