…what it’s doing outside! 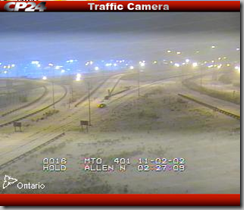 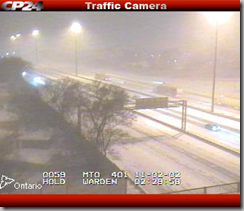 They were expecting up to 20-30 cm of snow overnight around southern Ontario.  I’m just grateful it’s SOUTHERN Ontario.  I’d hate to see what’s happening up north.

Great forecast for tomorrow, too:

Calgary, on the other hand, which usually gets AWFUL weather right about when lovely spring temperatures are starting here, is right now enjoying yet another chinook.  Apparently, last Thursday, the temperature went up to 13°C, with an overnight low of 4°C.  And then it plunged right down to -29°C three days later.

Elisheva was born during a chinook, but I missed most of it – between 2 days in labour and three days stuck in the hospital.  By the time she got out, it was ungodly again.  The first time I took her out in the carriage, it was – I am not kidding – minus FIFTY with the windchill.

Through thick blankets, scarves, hats, snowsuits, and the carriage boot, she screamed and screamed from the cold…

The upside of the weather is that Ted’s work and Elisheva’s school are both cancelled – SNOW DAY!!!