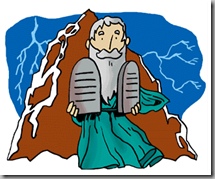 A lot happened in last week’s parsha – let’s look back:

They were chased… (by the מִצְרִיִים!)

בני ישראל were attacked and  had a war… (with עֲמָלֵק !)

We survived all that!  And now, בני ישראל were safe, walking in theמִדְבַּר  – the desert.

Not many parshiyos have a person in their name!

יתרו was צִפּוֹרָה’s… (father), and they came together from… (מִדְיָן ) to meet מֹשֶׁה and בני ישראל.

יתרו heard what happened at the ים סוף and wanted to become… (a גר, convert/Jewish)!

Meanwhile, משה was WAY too busy!

All of בני ישראל were coming to him… (with questions and arguments.)

The lineup to ask משה a question was… (so long!  It took all day to get to see him!)

יתרו told משה he had to choose… (שופטים/judges).  All the judges must be… (צדיקים; people who would judge fairly!)

If the judges didn’t know the answer, then they should… (come to משה).  That way, everybody gets a fair answer.

("a nation of priests and a holy people")

Nobody was allowed to go near… (the mountain); משה put… (fences around it to keep them safe).

On the third day, בני ישראל gathered and… (heard thunder and shofars; saw lightning, smoke and fire on הר סיני) 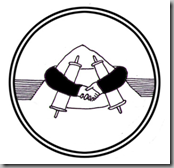 These are the TEN things ה׳ told us at הר סיני:

Right away afterwards, ה׳ taught בני ישראל how to build a… (מִזְבֵּחַ/mizbeach/altar).

This is because bringing קרבנות (offerings) is like… (תפילות/tefillos, our davening).

There are a lot more rules coming, as we’ll see in next week’s parsha…!