Me and Blather: it’s just my “nature”… 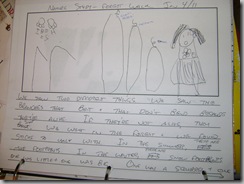 Michelle at Lionden Landing writes of a nature walk outing she took with her daughter and a friend where the challenge was listening to nature.  Which made me think of the little urban nature walk we took yesterday, along a route we have travelled many times, and now in three of four seasons.

As a nature walk, ours went pretty well – it was a lovely, mild-weather day.  But I realized about 3/4 of the way through what was wrong:  my running commentary.  I guess I feel the educator's burden of EDUCATING, but sometimes, that's supposed to be a passive, not active process.

Michelle writes that her daughter was amazingly quiet on their “listening” hike.  “Normally…Froggy is a loud running commentary of every thing she sees, hears and feels.”  Oops.  That’s me!!!

Anyway, at that point in our walk, I shut up, and resolved to talk less and listen more next time.

Eek.  This is harsh.

Our main nature walk area, in Cedarvale Ravine, is slightly foresty, in a way that I know is artificial, because the houses on Strathearn are just a few feet away.

I also happen to remember when my parents first moved to the neighbourhood, 15 years ago, and there were barely any trees on the hills.  How do I know?  Because my dad took me and the kids tobogganing down them our first winter back in Toronto.  But then the city came and planted up all the hillsides and now, to the kids, anyway, it feels totally wild.  A tiny teenaged urban forest with subways rumbling faintly beneath it.

(To their further credit, the city also came along and created a “wetland” environment in one of the marshier corners two years ago… which thrilled me to no end after a decade of watching them try to mow the swampy depressions into some semblance of a soccer field.  To the kids, it will have simply been there forever.)

Naomi’s narrations – whether they’re about walking or parsha or whatever – are getting too fast for me to write down!  She loves seeing her words on paper.  There are two themes in her narration, and a third just in her drawings:

The GIANT stick was actually the better part of a tree, branches stripped off, that I found lying on the ground.  I picked it up and lay it alongside two sticks:  “small, medium, GIANT-sized.”  The kids thought it was hugely funny (the giant “stick” was maybe 100 times the size of the small one!).  Then, I tossed the “stick” back into the woods, which was satisfyingly like how I imagine caber-tossing feels.

So I henceforth reveal my…

Schlep (perhaps by car) to somewhere a little less urban, like the Humber Arboretum, and do a real nature walk at least once, hopefully twice, during the remaining winter months.  Also – walk further into our little urban ravine, where  you’re never out of sight of houses and roads, but where there is a little more of a marshy area that provides an interesting contrast with the forested hills.