The evolution of wallpaper… 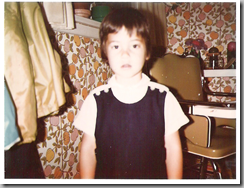 Found in a photo this evening at my mother’s house:

The wallpaper that gave me nightmares as a child!  This is my brother, Eli, blown out by the flash, but surrounded by twining snippets of vines bearing a variety of orangey, reddish, yellowy fruits… including pumpkins.

Even as a moronic kid, I knew pumpkins did not grow on the same vine as anything else.  This wallpaper really literally made me frightened in my sleep.  Not to mention the avocado-tinted vinyl-and-chrome high chair in the background that matches the wallpaper perfectly.  The chair would be vintage-cool now, but I could never face that wallpaper again.

Here is the wallpaper my mother eventually replaced it with, which is still innocuous enough.  And let me just say, I never missed the pumpkins, even for a second.  Pumpkins!

More than the wallpaper, however, my family was amused by the shot of ME in front of the new wallpaper, chowing down on a hot dog.

Yes, it’s true… as wallpaper becomes more tasteful, fabric patterns get more garish to make up for it.  This was my bat mitzvah finery:  a ruffle-y maroon-pink blouse with matching culottes.  I refused to wear a skirt; I boycotted them starting in Grade 1, and the culotte thing was a compromise.  To my mother (perhaps from a distance?), it looked like a skirt, but I knew it was PANTS, so I was happy. 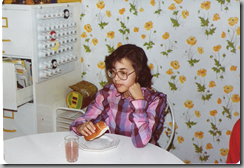 I guessed earlier that this was actually taken the night after my bat mitzvah; Saturday-night hot dogs was more of a religious ritual in our family than shul or anything else.  But now I’m not sure that it was, because the calendar in the background doesn’t seem right.  My bat mitzvah would have been Saturday, January 16, 1982, and the calendar looks like it’s up to March already, though the top circle is on a Saturday.  I guess it will remain a mystery why I sit so glumly alone with my hot dog – and which genius thought this was a worthwhile photo to snap (and preserve for the ages) while I was at it! 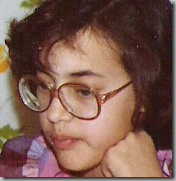 Abigail said I look very dark-skinned in this photo.  It’s true:  I was fairly sallow and olive-y through most of my elementary-school years and then, mysteriously, lightened up when I reached adulthood.  Of course, those who know me now will also marvel at the straightness of my hair.

It turned curly when I was 18 – not such an amazing story, except for anyone growing up wishing they had curly hair:  it could happen to you!!!

A few more childhood pictures coming up… why not? :-)