Toronto has a new mayor… who looks EXACTLY, completely, like the ultra-obese human descendents in the kinda surreal Disney/Pixar kiddie sci-fi dysto-pic wall-e.

Here’s Captain McCrea, in charge of the ship ferrying the remnant of humanity to safety… alongside soon-to-be-celebrated Mayor Rob Ford. 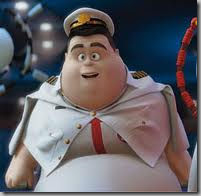 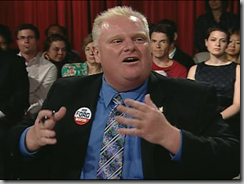 What a buffoon this guy is – and, sadly, I don’t mean the animated one on the left.

Googling pictures of Rob Ford,  the first one that came up was attached to an article from 2008 announcing that he’d been “cleared of domestic abuse charges.”  Well, yay!  That’s a leadership quality I look for in a mayor!

Oh, wait, here’s another:  a 10-year-old Florida DUI charge under his belt.  His rebuttal:  “We've all made mistakes.”  Here’s his mugshot – maybe they should save money at City Hall and just this on the official City of Toronto Mayor’s page whenever the heck it is that he takes office. 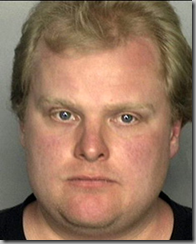 Is he good for the Jews?  The consensus is yes.  I really couldn’t care less.