Well, in this case, I wish I had a use for a “goyishe” calendar, because I am SO completely besotted with this UglyDoll calendar I spotted last night. 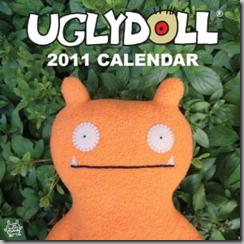 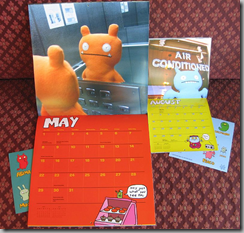 Okay, maybe this is something nobody knows about me.

I only own TWO uglydolls, and they are actually both the same one:  Trey.  Trey is my hero.  I own him full-sized: 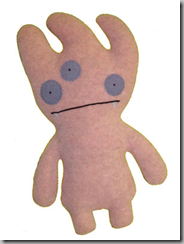 And also keychain-sized, where he/she dangles annoyingly from the rear-view mirror, along with a rhino from the old car. 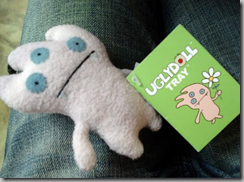 I first spotted these on a long-ago trip to NYC for my cousin Avi’s wedding.  We only had two kids at the time – in fact, I don’t even know if we were married yet.

My father took the kids to the museum and Ted & I just wandered… into FAO Schwartz, of course!  Where I spotted Tray and DIDN’T buy him.  He later arrived in my arms as a gift from a friend and I have cherished him ever since.  This was before the current “plushie” craze and I think I was just so astonished that a toy could be both cuddly and a tad homely at the same time.

Tray is the brain of the bunch. Not because she is smart, but because she has three brains...one in each lump, or one per eye, as Babo likes to point out. Tray is also the hungriest of all the Uglydolls, and has a desperate need for Blueberry Pie. Some say her eyes are blue because of her craving for it. Tray often combines her hunger for pie with her brainpower to talk Babo into getting food for her. Unfortunately, Babo usually brings back a branch, a rock, or something even less tasty. If you want to make Tray extra happy, sit her next to you in the subway, or in your car. It makes her feel important.