If you’re looking at this picture and thinking “cute kid,” you are NOT a stroller junkie.  That’s how you can tell. 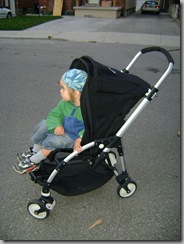 Now, you may have thought my days as a curbside-spotting stroller junkie were over… I definitely did.

But that was before the fortuitous shiva call (oops – okay, I truly am sorry for their loss!) this afternoon that led me to this baby… the Bugaboo Bee.

I have been dreaming of a bugaboo falling into my lap, but thinking it would be long after I was done having little kids.  It takes a while before premium strollers start being available curbside.

Now, this is definitely NOT the bugaboo I’ve been dreaming of, but the thing is – it works amazingly well!  It is very small and very light, and that may be exactly what I need at a stage of my life where my kids are mostly walking everywhere.  There is not a mark on it; all buckles, straps, the basket, etc., are pristine.  (And yes, it was definitely being given away – I have no idea why.)

If it works well enough, I may consider using this and freecyling the Pliko (which was freecycled to me originally).

As children of a stroller junkie, one of the first things my little kids ask when they see a new one rolling up the driveway is… “can I try it????” 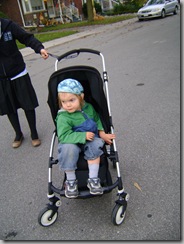 Naomi (who doesn’t even go in a carriage at all anymore, mostly) was in the seat before I even got up to the house – she ran out in bare feet to meet me.  But then, she’s been trying on found-at-the-curb strollers since she was about 6 months old.  So I rolled her around for a while with the buckle on to make sure it was operational and safe.

And as you can see, GZ got his turn to try it, in these pictures, on our way to my mother’s house for supper tonight.

I even tested it out with Naomi standing “tandem-style” on the back axle – because my favourite feature of the Pliko is that it comes with a tiny platform on the back for a little person to stand on.

According to the Bee’s manual, you are most definitely not supposed to use it with a rider anywhere other than in the seat, and you are not supposed to use it with more than 37 pounds of child-weight.  It was slightly uncomfortable for Naomi when she was standing, and slightly tippy when she stood that way, but at no time was it difficult to push.  I’d probably worry about what the extra weight was doing to the suspension; I might not let her stand there all the time, but only when she was super-tired.

Still… there is nothing, just nothing, like the adrenaline rush of finding a NICE, new stroller that nobody wants, and giving it an appreciative loving home.

As I did almost two years ago when we gave away our old trusty MacLaren (because I’d found a yummy new Pliko, which was later stolen), I think I’ll quote Dr. Larch in The Cider House Rules:  "The Bee has found a family. Good night, Bee."