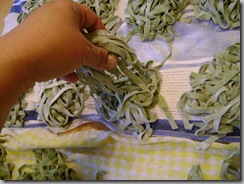 I was going to make bowties, but decided they were too patchkedik, so I just rolled out the dough flat and sliced it into linguine-type noodles.  The secret to success, or at least, part of the secret, is FLOUR.  Lots and lots and LOTS of flour.

Today, I discovered that if I flour the pasta sheets before cutting them, they will not stick to each other as they come off the rollers.  Important find, indeed. 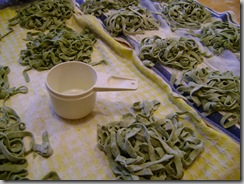 Also, I pick the “nests” up and toss them around a bit as they dry, just to make sure nothing is sticking.  I have had far too many evenings ruined by pasta sticking to itself…

And yes, because tonight is Thursday, these are vegan, ie eggless pasta.

You can’t see them all, but there are exactly 15 nests.  There would have been 16, but I divided the dough wrong and one batch was very small, so I just did it all in one nest.

p.s.  This pasta is green because I boiled and puréed a bunch of bodek spinach and added that in, with the boiling water, instead of plain water.  You can also use tomato for pink/red pasta… or any other vegetable you can imagine!

Late-night Post-postscript:  You may have heard (as I have) that it is not worth the effort to make your own pasta from scratch if you’re not making an elaborate or filled pasta (like ravioli or tortellini, with custom fillings).

Well, I don’t know about non-kosher eaters, who may have excellent fresh-pasta alternatives at their local grocery store.  But here in Kosherland, pasta is the dried stuff you get in the grocery aisles.  With no guarantee of freshness, and no flavour or texture to speak of, almost anything you make at home will be superior.

Biting into this pasta was just… special.  The pasta itself was almost creamy, cooked perfectly al dente, super-slippery and delicious with a not-overwhelming hint of spinach in the flavour.   I was amazed at the silky texture of the noodles, given that I’d made them with coarse sandy semolina flour (aka Sooji or Cream of Wheat).

It was the kind of pasta that called out for the plainest treatment possible, so I changed my plan from pasta sauce to tinned tomatoes to which I added some herbs.   You can see a photo of the outstanding finished product here.