I haven’t posted enough food stuff here lately (though you can always check out my bread blog!), but I have made this stew a couple of times in the last few weeks and it always turns out amazingly well, and super-easy to make.  Utterly perfect for autumn in Canada.

THIS RECIPE ACCEPTS LEFTOVERS!  If you have a decent quantity of leftover roasted veggies, skip the labourious Step 1 and just toss them in instead.  Ditto with whatever leftovers you have from last Shabbos’s chicken (or any) soup.  I made it once with a chicken/squash soup and it was utterly amazing.  Leftover grains would probably also be scrumptious; add in Step 4 with the soup/broth.

If I didn’t have a pressure cooker, I’d probably just do this in a pot and it would still be very good.  The pressure cooker reduces the cooking time, I guess, and perhaps it does a better job of getting all the flavour out of the veggies.  And I like having something I can use my pressure cooker for besides sausage risotto.

Step 1:  Prep and roast a bunch of veggies at 400°-425°.  This is the hardest part, I promise!  The mix of veggies is very casual and just depends what you have on hand.  Here, I’ve used onions, potatoes (organic red, skin-on), carrots, garlic, parsnip.  Growing up with my mother, it just doesn’t taste stew-y without parsnip.  Red peppers would work fine, as would zucchini.  Whatever you’ve got.

(Oh - squash works great, and roasting it couldn’t be easier.  Forget about peeling and dicing; just cut it in half and place it face-down on a pan in the oven until tender.)

Toss veggies with a little olive oil, salt, and pepper.

Roast until the veggies are just starting to turn brown and tender, stirring every 10-15 minutes. 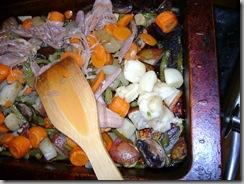 Step 2:  In pressure cooker, stir cubed beef (any cheap cut) to brown it.  Toss in a little salt and pepper.  This would probably work better in the wok (they tend to boil rather than fry in the straight-sided pressure cooker), but I don’t want to dirty two things. 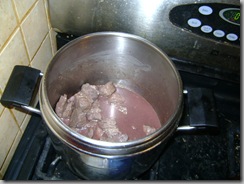 Step 4:  Add roasted veggies and 2 cups of leftover chicken soup from Shabbos.  If you don’t have leftover soup, you can  use water, or add a bit of chicken soup mix to the water.  This adds a lot of salt.  Here, I wasn’t worried about salt because the broth was my mother’s and (as she ALWAYS points out) she doesn’t oversalt her food like I do.

I use enough broth to ALMOST cover the veggies.  You could get away with using a little less or more depending on what consistency you like your stew.

This is the step where I should have put in a bay leaf, but I forgot. 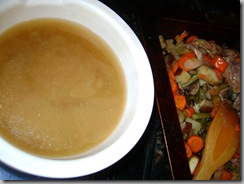 Step 5:  Seal pressure cooker and turn burner to high heat.  I love my pressure cooker!  I got it free and I think it’s beautiful.  (I thought you’re supposed to value things less if they’re free?) 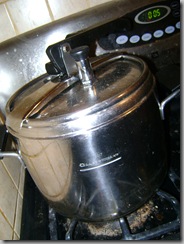 Step 6:  When cooker reaches pressure (on mine, the safety thingy pops up when it’s at pressure), set timer for 10 minutes.  Slowly turn the temperature down to medium or even low.  I do it a bit at a time so I don’t lose pressure.  If you don’t have a pressure cooker, I’d imagine about 30 minutes of cooking the veg and meat together would do the trick.

Step 7:  Go back a few steps and before you start making the stew, toss a loaf of semolina bread in the oven.  Time it so it’ll be done just as your stew reaches pressure so it has time to cool off. 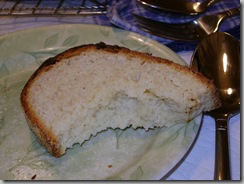 Step 8:  After ten minutes, turn off heat and let the pressure drop naturally.  If you’re in a hurry, release it any way your cooker lets you do it.  (mine has a button)

Step 9:  Open the cooker and check the consistency of the stew.  If you want it thicker, stir in a simple flour-water paste (I used 2 tablespoons of flour with just enough water to make it look like milk).  Some people (my mother) whisk flour directly into the stew, but when I try it, it just makes snotty clumps.  Boil the flour a few minutes so it mixes in and doesn’t taste raw. 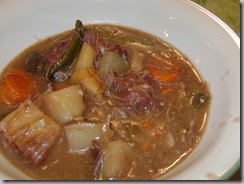 (Yes, this stew ALSO contains chicken… my mother left huge shreds of it in her broth, and I just dumped the broth right in, as-is!  Yum!)

Super-Secret Stew Hint:  Stew is ALWAYS better the next day, and there is a reason for this involving fats redistributing themselves in the meat and tenderizing as it cools.  Alton Brown explains it better than I do.