Cheating… and happy about it! 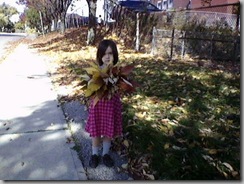 After a week or more (including Sukkos) of rain and misery - 20° and sunny, bright blue skies… and the leaves in all their glory.

We found a kite – did I mention it is the BEST breezy fall day for kite-flying?  Unfortunately, the string snapped while I was extricating it from the tree, but we still had a few feet so we could fly it over our heads.  Naomi loved running with it! 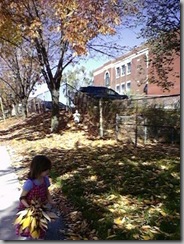 When we got home, I had to get GZ into bed, but I also wanted Naomi Rivka to work on a narration page, just telling a little about what we saw along the way.

Oh - I also explained that the top of the page was for drawing and the bottom was for writing.  She’s a little – ahem – unencumbered when it comes to following rules, but I emphasized that she was allowed to do both, just that each had to be in the proper place.

We brought a baggie home with samples of leaves etc, so she pulled those out and basically drew them, then wrote her best guesses for the spelling of the words.

When I was finished with GZ, I came out to see what she had done, and helped her record a few short sentences about our walk as well. 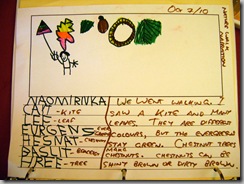 HREE?  I am trying to be soooo accepting of her phonetic spellings, but how the heck does she get HREE for “tree”????

YM stayed home to work on a math module – the crazy thing took him all morning and I have no idea if it’s because he’s dawdling or working inefficiently or … well, I don’t know what.  One module = 1/20th of a full-year course, so perhaps 2 “weeks” worth of work, but he can usually do them in just a couple of hours.

He has applied to a new yeshiva for this year, but until we hear back, it’s like an extended vacation - hanging around the house, playing with his new iPod.

The yeshiva has a full English program, with regular Ontario high school credits, so if he gets in, that’s the end of his homeschool career.  I will miss it, but I don’t think it’s been the best for him because he needs someone on top of him constantly and thrives on positive, personal feedback, which is totally missing online.  Most of the time I suspect it feels like you are submitting work to the computer and being evaluated by a computer.

Still – I don’t think he realizes how much public school education has broadened his horizons, and I have appreciated how doing it online has allowed him to access all the readings and other resources of a secular classroom within the relatively supervised environment of our home, where we can also talk stuff over as it comes up (though somehow I missed an entire unit on human reproduction last year!).

Hmm… perhaps the yeshiva would be willing to take him for half days, seeing that he’ll be almost 1/5 through the school year by the time they let us know…?