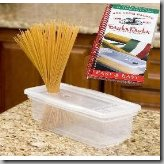 And instead of watching TV, like many people, I’m window-shopping online.  I don’t really think I’m sick, because I have steadily improved with every passing hour.  Which means it’s just our general “home-sickness” – the sneezy, malaise-y allergy feeling three out of six of us get when they walk through the door of our house.

But I am definitely window shopping.

Who knew you could cook pasta in the microwave?  Apparently, very good pasta, at least according to 186 rave reviews on Amazon.com.  Not in the original “Pasta Boat” that I was lured in by from an infomercial on YouTube.  No, apparently, that thing is terrible.  But the Fasta Pasta, on the other hand, really seems to work.

So who would want to cook pasta in the microwave?

I’m thinking this would make a terrific gift for Elisheva.  It takes about the same amount of time as on the stovetop, only without the fire aspect of things and without the search for:  pot,  colander, room in the sink for the colander (with only a single sink, it’s often full of dishes).

It’s not great for a family of six – apparently it holds four servings of spaghetti, max, but to throw a couple of packs of wacky mac in…?  Perfect.  Of course, this is the kid who burns potatoes in the microwave… I’d have to warn her to be wary of the cooking times.

Here’s a video for the one I want!

Have I ever mentioned I loooove infomercials?

Just thought of another use:  YM, the bochur who has everything except food.  Two years ago, he survived his year in yeshiva on bread and eggs.    This would add one more item (albeit still a starch) to his yeshiva repertoire.  AND he has a birthday coming up…

It’s the perfect gift for every teenager on your gift list!