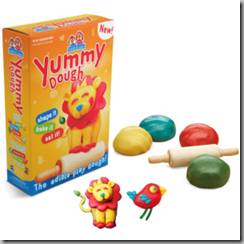 Ted recently bought a package of 3 boxes of this stuff at Costco.  He says he paid around $12, probably meaning $15 but he doesn’t want me to know.  So about $5 a box.  Ish.  Each of the 3 boxes contains: 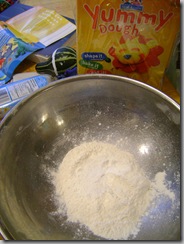 2) Add exactly 20ml of water – yay, they provide a cool syringe to make sure you do it right!  See how the colour emerges right away? 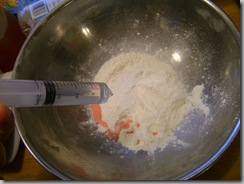 3) Stir until crumbly.  Mixture will feel WAY too dry, but do NOT add more water! 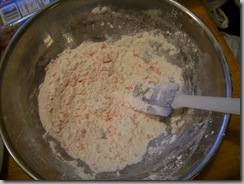 4) Gather and knead until it forms a smooth ball.  Yes, it WILL happen! 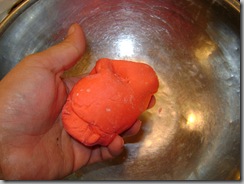 5) Repeat for the other three colours.  Because the mixture forms a nice clean ball that absorbs all the powder, I didn’t even need to rinse the bowl in between!  Store in an airtight container, because the dough dries out pretty quickly. 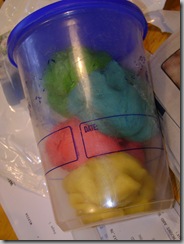 6) Roll out, knead, and shape into whatever the heck you want. 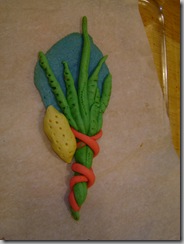 So as I said, my initial goal here, naturally, was to make a lulav and esrog set… so I did.  Lovely!

And just as naturally, my kids didn’t agree.

So YM made a hat, Naomi made a blonde princess, a heart with a green arrow through it (one of the demonstration projects shown on the side of the box), and a yellow ant.

(Ants will be our first Living Learning Science unit, but most of the books are here from the library already.  She gave her ant 2 legs and 2 antennae, but she definitely has the head-thorax-abdomen combo down nicely already!) 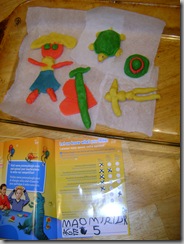 Eventually, I went secular too:  GZ asked me to make it for him (he has less than zero interest in anything crafty). 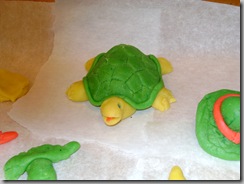 The dough was easy to work with and surprisingly non-sticky.  Mostly, it felt like regular PlayDoh, and a quick skim of the product’s website revealed a section addressing “confusion” – ie, where your toddler decides that regular PlayDoh IS edible and starts to actually eat it because of the similarity.  Mostly, I would hope they’d notice quickly enough that it doesn’t taste great.

The Yummy Dough tastes okay, even unbaked.  Not overwhelmingly sweet, but pleasant, not artificial.  There don’t seem to be different flavours associated with each of the different colours – it all mostly tasted the same.

The dough mix is not only kosher but PAREVE… so we ate them for dessert.  Well, except Naomi Rivka, who hadn’t eaten her supper.   She will have hers for breakfast.

I couldn’t really tell the difference, taste-wise, between unbaked and baked Yummy Dough.  The baked items were crunchier, and I guess there’s a novelty in waving your sculpture around a bit before eating it.  But really, I could see nibbling at it either way, baked or unbaked… 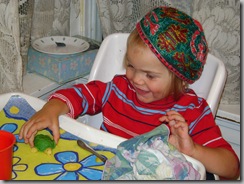 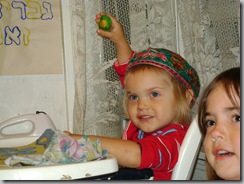 Frugality perspective:  So, was it worth $5 a box?  I think so.  And we bought it with a gift card anyway, so it pretty much cost us nothing, not even gas, because Ted was at Costco anyway.  Plus, it’s kosher!  And a novelty!

Homeschool perspective:  This stuff could be a valuable addition to a homeschool curriculum – a fun way to build models and/or reinforce something in a physical way.  You could probably use it for any subject… roll and bake shapes for geometry, build insects, butterflies or whatever for science.  Create yummy alphabet letters, even maps… well, maybe not.  The taste is neutral enough that  most kids and big people will like it, but it’s probably best to “make it a treat” (a la Sarah Silverman) and not use it with every single science unit, alphabet letter, etc.  :-)