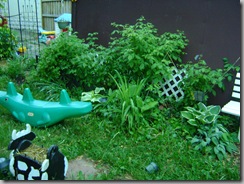 Actually, it was MORE than decimation – I removed about half of the raspberry patch.  But it’s a good thing, I promise.

Here’s a picture from back in June.  It bore fruit shortly after I took this picture was taken, and then got WAY scruffy and overgrown.  The whole bed was tangly, disorganized, flopping about, and invading towards the bench, and the second crop was beginning to grow in.

Something Had To Be Done. 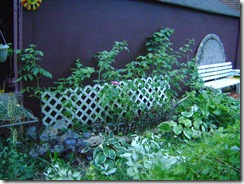 It was almost dark by the time I finished hacking at it, so it’s kind of hard to see, but there are far fewer canes, with lots of air in between, which is what you need if you want your patch to stay healthy and keep producing gorgeous, huge berries, year after year.

Here’s the discard pile.  You can’t really tell here, but it looks bigger than the actual plants that I left. 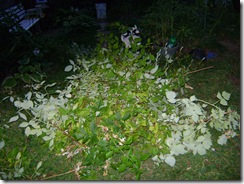 I have been worrying for MONTHS about thinning this patch, nervous that I’d cut the wrong thing.

But here’s what I may have figured out, at least with my raspberries, which are apparently of the primocane type, or “everbearing” – meaning they bear fruit twice a year (Spring:  June/July and Fall: August/September).  Of course, I could be wrong, in which case I’ve just messed up the next year of raspberries.  But I don’t think so.

Year 1:  New canes (primocanes) emerge in spring and grow big, green and strong.  They bear fruit in the fall and then hunker down for the winter.

Year 2:  Old canes (floricanes) emerge from the winter to produce a decent “spring” crop, then wither.  They will never produce fruit again, and must be trimmed out to make way for new growth.

Thus, it should be a simple matter to identify every spent Year 2 cane and snip it off.

In my case, the old, spent canes (floricanes) were easy to identify because a) they still had withered raspberry clusters left on them, and b) they were brown and woody (see photo on left).  The new growth (primocanes) were also easy to identify because a) they are green and supple (photo on right), but also because b) I left pruning too long and many have flowers or actual berries forming on them! 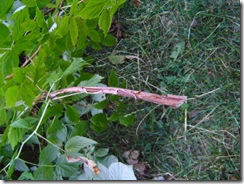 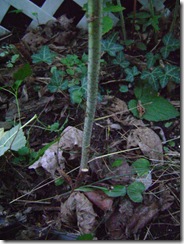 I drew red X’s to emphasize where I have bamboo poles crossed to support raspberries, but it’s still not quite clear.  Anyway, the entire area between the two red X’s was THICK with raspberries that are now GONE.  I can sit at last and hopefully it’s not too late for my Toad Lily to grow in and maybe even flower a bit this fall. 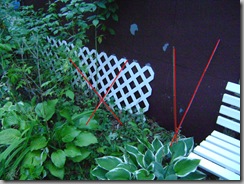 It’s so easy to lose my resolve when it comes to raspberries.  I vowed I would not let them encroach beyond their bed.  But they are SOooo delicious!!!

Anyway, I’m so relieved that this is off my to-do list for another year.  Just hope I trimmed the right ones!