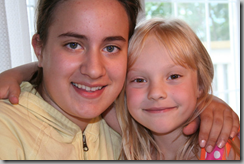 A blogging homeschooling mama posted a couple of weeks ago that her ex-husband died.  He had committed suicide after what I gather were many troubled years.  He was 33 years old – the same age as my older kids’ father.

I don’t know the whole story, or even much of the story, but I know what the pictures show and what this blogger has mentioned, including the fact that he had only recently “reconnected” with his kids – in this case, two girls.

I see so many parallels.

This mama has recently posted that, “This blog is dedicated to my daughters' father.  He always wanted his children homeschooled. He wanted them to have "better" than what he had. He deeply admired what they were being given in the liberal arts method of learning.  Sleep well, Scotty. I won't let you down.”

Not letting Jeremy down is something I think about a lot this week, as I vigilantly check my email and facebook for more photos of my big kids.  People here marvel that I could send the kids off to live with “strangers,” but that’s not what their Calgary family is at all.  Their Calgary family is family.

Maybe even more so, because I chose them.  I have to believe that somewhere in my infatuated 18-year-old brain there was absolutely the thought that these were people I wanted in my family – and my kids’ family – forever and ever.

So they are.  So I send my kids, even when the link, their son, is missing; I know they will find many ways to connect, even without him.  And I know that, even though the kids are being raised far away and very differently, they will still be familiar to each other, always.

They are the baby spiders, and that is the point of the book – it’s almost too blunt an analogy for what I’m looking for.  Even though we are missing Charlotte, at the end of the book, her babies are so much like her, so many pieces of her, albeit different and incomplete – a myriad of refractions that mysteriously make up the whole.

Kind of like those weird 3-d “jumble” pictures they used to have that you’d have to stand back and squint at and if you were really lucky, your eyes would focus on the image and it would jump out from the background noise.  Or so I’m told:  I have never managed to see one of those things yet.

I feel like it’s some kind of test, every summer:  can they see him?  Am I raising the kids in a way that’s true to their father, true to themselves?  Am I letting him down?

When the big kids were not so big, YM’s affection always came cheaply and easily, but Elisheva was a tough nut to crack.  I always worried, every summer, that it would take him half the visit just breaking the ice.  I don’t think it did, I suspect they clicked instantly.  But there was always a moment, when the kids flew home, got off the plane, and she realized she didn’t have HIM, just the stuff, the new Hello Kitty coin purse or whatever, and she’d start weeping.

And then she’d be cold with him, over the phone, all year.  Just “hello” and very basic, awkward conversations about school and friends and trivia.  Except at the end, their last phone call, when conversation really started to flow, they really clicked, and I felt like I was eavesdropping on one of their summer vacations together.

He was relaxed, open, confident, even a little happy, for the first time in a very long time.  I have already posted a very long ramble about all that stuff here.  (You don’t have to read it; it was therapy for me, not you; luckily!)

And then he was gone.

The photo above, of Elisheva and a Calgary relative, was posted on facebook by Jeremy’s cousin, who knew him well – better, at the end, than I did.  His other cousin chimed in to say, “does she ever look like Jeremy!”  The gappy teeth, I know, but they say the eyes, and I guess I agree, though my memory of Jeremy’s eyes is clouded with sadness and goodbyes.

I really feel terrible for the little girls of this blogging homeschool mama.  Reconnecting like that, and then having him snatched away… just when things seemed like they were getting good.

But I feel lucky for my kids, that they can travel so far and still be recognized for the spiders they truly are.  For themselves, of course, in all their uniqueness, but also for what they contain, encapsulted, of the soul who was loved, who gave love, who lived uniquely and who will live on forever in his children.