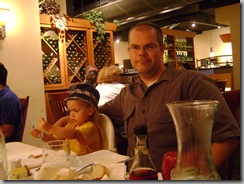 I’ve always dreamed of being a restaurant reviewer, but there are so few kosher restaurants here, it would be an impossible task.  Once you’ve reviewed them, there would be nothing more to say.  Plus, not eating in non-kosher restaurants, I don’t have much to compare them to.

Still.  A girl can dream.

Seriously, though, since it opened a few years ago (how long?) Bistro Grande has become one of my favourite places to eat.  It’s where we went for our anniversary; it’s where we take out-of-town friends and family.  It’s where I go for lunch if my mother offers to take me.

Partly, I’m just thrilled that any kosher restaurant would set itself up down here, off the beaten track of the Bathurst-Lawrence frum community.  It’s a risky thing, demanding that people venture out of their bubble to make the shlep down here to Eglinton (and find parking, which isn’t always easy).  For us, we usually just walk – it’s an easy 10-minute stroll from home.

Sure, it’s “just” a dairy restaurant, and so you might think Bistro lacks the instant cachet of “high end” that a nice kosher steak can convey.  But walking into the place, you (or at least I) get an immediate sense of “attention to detail.”  Lots of wood, dark ceilings, and the wines on display let you know immediately that this is not just another pizza-falafel joint.

The food is more than serviceable.  The menu reflects is a nice range of pizza, pasta, sandwiches, and brunch offerings on Sunday (I think).  Everything sounds pretty generic on the menu, but there is an attention to detail which is unique in this city’s kosher restaurants (even at the other “affiliated” restaurants like Dairy Treats and the downtown Oasis Cafe).

I had the fish and chips, which is made the right way, thickly battered but not at all greasy, with a homemade coleslaw, thin-sliced fries that taste delightful and fresh.  The tartar sauce is eye-opening; more of an aioli than your standard mayonnaisey slop.

Ted and the kids shared pizza (I gave him some of my fish), while his brother and sister got the salmon burger.  Before the food arrived, the waiter brought generous baskets of bread and pastries, including danish and rugelach, something I’ve never seen before.  In fact, generous is not a word one could usually use to describe a kosher dining experience.

But indeed, the portions when the food arrived – after not too long a delay – were also generous.  Everybody had just enough, and nobody went away hungry or unsatisfied in any way.  Ted’s sister, in particular, commented on  how nice it was to eat fish without having to worry about cross-contamination; she has a major seafood allergy and most non-kosher restaurants are too casual about mixing fish with other seafood – as anyone who believes eating fish in non-kosher restaurants is “kinda kosher” should know.

The only letdown was that the delicious spring rolls, which are still listed on the menu, were not available.  The waiter’s explanation was that they’d run out and hadn’t had a chance to make more.  Fair enough, but perhaps they should list off what’s not available before you begin to order.  I hope they have them next time!

I would never have thought to take home the pastries that were left in the basket after lunch, but Ted’s sister said they were only going to throw them away anyway – which is true, and probably the frugal Scot in her coming out.  The waiter said he’d gladly bag them and when he returned, he said he’d tossed in a few more because there were so many of us.

Now, the prices are not pizza-falafel joint prices, either, but they are not all that jaw-dropping either, especially compared with the high-end meat places.  You will pay $20 for a main course, and tag on much more if you want an appetizer, wine, dessert, or a milkshake.  The prices are too high for an everyday family meal, but not at all surprising and, given the consistent quality, well worth it.

In fact, consistency is one of my favourite things about Bistro.  There are a few “nice” meat places I haven’t tried, and when our anniversary rolled around last winter, I was toying with going to one or another.  But then I thought of Bistro.  Close to home, thoughtfully designed, clean, super-friendly, and very, very reliable.

Sure, we could have had a luxury, high-end dining experience, and perhaps the aged kosher steak of our dreams.  But I’ve found those places – especially when new – tend to vary greatly.  You could have a fabulous experience, or, on an off-night, an entirely awful one.  But as I said at the time, I have never been disappointed at Bistro; not true for any other restaurant.  And that’s got to be worth something.  We went to Bistro, and had a great time, for not as much money as we would have spent at one of the fancier places.

Part of my dream of reviewing kosher restaurants is trashing the washrooms.  Because they are usually heinous.  Particularly in a community with, b”h, lots of children, the washrooms are almost universally under-equipped.  No change tables, down steep stairs into a dingy, stinky basement.  No paper towels, just some shredded, messy toilet paper to dry your hands.

Well, except for Bistro.  While the main washrooms are in the basement, but there are also accessible facilities on the main floor, with fold-out changing table, a sink that works and plenty of paper towels available.  The floors were clean and it didn’t smell.  These things are important, if not THE most important aspect of any restaurant visit. 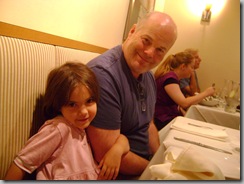 Ted’s brother and sister seemed pretty impressed with the setting and quality of the food, and the kids were mostly quiet and happy.

All in all, a positive restaurant experience, which is exactly what I have come to expect at Bistro Grande.