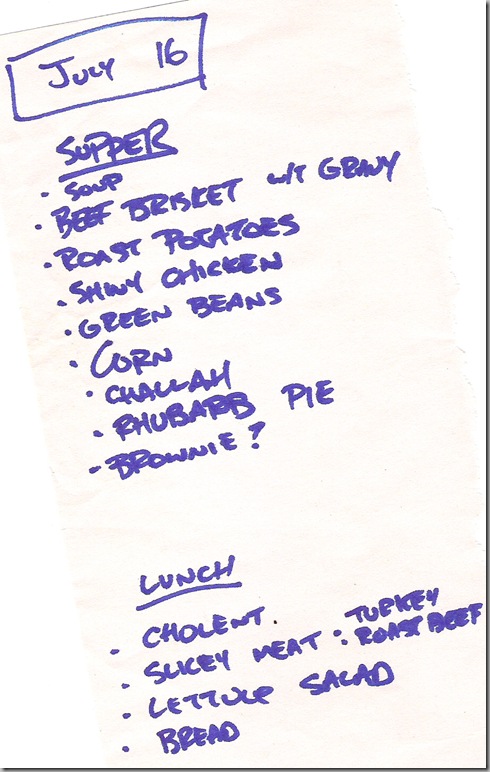 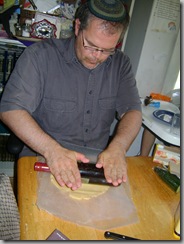 Ted’s off work today (he works every other weekend instead), so he made the rhubarb pie himself (and some mini-pie-lets with the leftovers), but I’m not doing brownies.  Kinda sick of brownies right now, unless anyone has an amazing brownie recipe that is worlds amazinger than the regular ones we make.

Here’s his pie, all done! 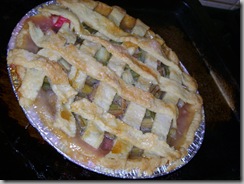 I’m baking banana cake right now, and if I have more chips left over (plus time, plus energy), I think I’ll try Mrs. S’s (Our Shiputzim) kids’ chocolate-chip cookie recipe, which uses oil instead of margarine or butter (pl us a whole lotta egg).  I won’t do the brownie thing inside, but it looks very interesting, maybe for Elisheva to make sometime…

The brisket and gravy are from the freezer – my mother made it a few weeks ago, but we had lots of leftovers.  The roast potatoes are local new potatoes, from the farmers’ market yesterday.

Oh - “shiny chicken” refers to glaze-style Shake & Bake… we seem to be alternating Shake & Bake flavours right now, but that’s okay, because we all LOVE Shake & Bake and Shabbos will be our last meat meals for a few more days!

Let’s see – what else?  The corn is frozen Green Giant Niblets, as usual.  Nothing else compares; tinned corn, nope; other frozen brands, nope.

The challah this week is from yet another new recipe.  Still trying to snap out of my challah ennui, I guess.

Can you tell I’m tired?  I think our Shabbos party was okay this morning, though I kept forgetting bits and sticking them in at random – they’re kids; they don’t remember and don’t care about the order of the songs anyway (I hope!).  But it was tough to muster the energy and doing that on a lack of sleep plus the return of the HEAT have me feeling, well, sleeeeeeeeeeepy in the extreme.

Oh – I just discovered a few pattypan squash in the bag from the farmers’ market!  The lady selling it said to slice it and bread & fry the slices in a pan.  So that’s what I’ll do.  Never had pattypan, but she said it’s basically the same as zucchini.  I don’t love zucchini, but other people do, and I’m always willing to taste a bit now that I’m mature.  ;-) 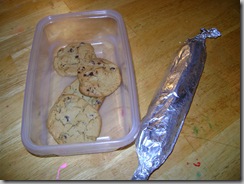 Post-Shabbos Post-Script:  Cookies, made & delicious!  Mrs. S.’s teenagers’ recipe made a larger batch than our regular recipe, enough for two rather substantial logs, which I froze for 2 hours instead of the recommended 1-2 hour refrigeration.

Actually, I only sliced one log – it made 12 very generous (read:  huge) cookies, plus one big blob of cookie dough that I was tempted to make into a 13th cookie, but it wouldn’t have fit nicely on the pan so we all ate it raw instead (Canadian eggs have never had the same salmonella problem as in the US).

I found the oil-based cookies very slightly drier, harder and less flavourful than butter or marg-based cookies.  Slightly!  But then, they also had less tendency to turn into toffee blobs than many of the cookies we’ve made in past.   BUT – it’s terrific to have this as a fallback and easy recipe.  Much less mixing (no more waiting for margarine to thaw OR teenage daughter breaking my mixer by attempting to cream chunks of frozen marg).

Also, these big sturdy cookies would be great with a blob of ice cream (pareve or otherwise; homemade or otherwise) squashed inside, then refrozen.    The regular choco-chip cookies we make would probably be too crumbly to stand up to the task, but these (probably sliced a little thinner) seem like they would be fine.

Yum!  I’m baking up the second batch for the kids to take on their “camping” trip tomorrow morning.