Round and Round the Jewish Year: A Review 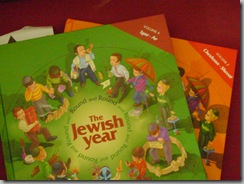 Just for “fun,” ie to relieve the Three Weeks tedium (despite the fact that we’re really not supposed to have anything new or delightful), I went out today and bought our second in a not-yet-fully-published series called Round and Round the Jewish Year by Tziporah Rosenberg, with illustrations by Ruth Beifus.  (published by Feldheim / Sifriyat Sharsheret)

It’s not bad.  There are stories, poems, pesukim and pictures for each of the major events of the year, grouped by month and presented in a nice, logical order with good flow and segues between the sections.

Everything is nicely laid out with great illustrations that are free from the “weirdness” that plagues a lot of Jewish and Israeli books.  I especially like the cover picture, with each month represented by a little yeshiva bochur doing or holding something to represent the month.  Pictures include men, women and children of both sexes, which has become a major criterion for me since realizing that a lot of frum publications now 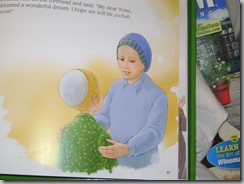 Mommies are drawn wearing tichels so it’s obvious that their hair is covered, and that’s just fine by me, because that’s how I cover my hair.

The book’s text offers more or less readable, literate English.  (more or less:   a description of the Shalosh Regalim in Yerushalayim includes this poem:  “There was a special place / With always plenty space. / Jews came from far away / They all had room to stay.”)

I don’t want to mock, though, because really these are a more-than-decent introduction to the passage of Jewish time.  I love the fact that there are still sections covering the months in which there is no major hooplah – a discussion of rain and the water cycle in Cheshvan, for instance.   So many kids’ books jump from Sukkos to Chanukah to Purim with nothing in between.

We have volume 2 (Cheshvan-Shevat) and volume 4 (Iyar-Av) of these books so far; I don’t know how many have been published yet… perhaps all of them by now.  I’m excited about accumulating the rest, and at $19.99 for a hardcover kids’ book, the price per volume isn’t terrible.

These are a great early introduction to the holidays for kids who are too young for the Chagaynu series, which I also like a lot for older kids (and which would probably be very useful from a homeschool perspective because there are quizzes, crafts and other types of material).