More from the Garden: High, Low, and going BANANAS! 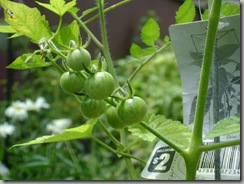 Some years, I feel like waiting for tomatoes even beats eating tomatoes, the anticipation is so delicious.

But then, there’s this week’s garden LOW:  potato disappointment!  Or at least, some kind of ugly potato blight. 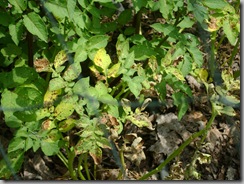 The leaves are turning yellowish and holey.  Weirdly, it’s only affecting the yellow (Yukon Gold?) potatoes, and not at all the purple ones.  So I may end up with some actual potatoes after all.  But maybe not; like I said a couple of months ago, I have a bit of a potato curse (here’s last year’s potato disappointment).

Getting me past the potential for disappointment is this season’s New Banana Love.  It’s nowhere near as thrilling as last year’s Siam Ruby red banana, but it is a bit exciting because it was only $10 – for what I paid last year, I can’t afford to keep killing banana trees.

Its pot is too small; I must MUST buy more potting soil so I can move it to a bigger home.  I used it all up, and now I desperately need some, both for this banana and for the big blueberry bush I bought on Canada Day at Plant World.

I do love the reddish speckles and splotches.  Ideally, it needs some big, bushy pure red coleus in its pot to play those up a little bit. 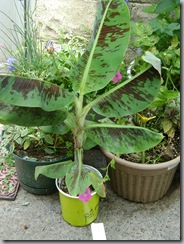 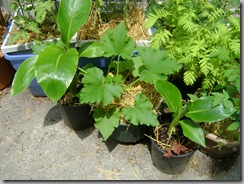 Keeping New Banana company are the two bananas I started from seed a couple of months ago, which are really gaining in size now that they’re in nice, big pots.  I’m kind of worried about what I’ll do with three bananas over the winter.  I suspect I will have to sell at least one and impose whatever’s left on my mother.  Her living room is south-facing, sunny and spacious, but she really doesn’t want more plants – or clutter.

Well, maybe winter will just decide to pass us over this year.   I can dream, right?