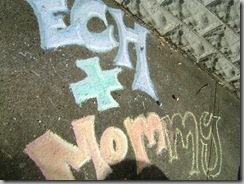 I seem to have committed to drive a neighbour to the airport at 6:30 tomorrow morning!  :-o

It just popped out, I swear!  I asked her when she was leaving, and she said she has to be at the airport by 7:15 tomorrow, and there the words were:  “I’ll drive you.”

I do all kinds of chessed (a little; sometimes) and don’t blog about it or expect sympathy or back-pats, but this is WAY above and beyond.

But that’s the deal, you see. 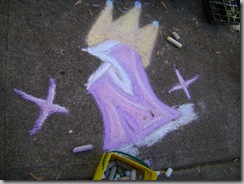 When my father took me out and bought me my first “real” car just over a decade ago, I made a deal with Hashem.  Not a Lucky Penny God kind of deal, but I felt I needed to make a real gesture of gratitude.

So the deal was:  if anybody needs a car, and I have a car, I will use my car to help them out.  It’s the Mitzvah Car.

I have driven people and their groceries; old ladies in the rain and – only once because it’s not really appropriate – a yeshiva bochur rushing home erev Shabbos.  I have driven people to shiurim.  I have blurted out randomly that I want to help drive people all over this city, and even occasionally to other cities.

It really is no big deal; it’s the easiest mitzvah.  I love driving, though I admit to being at times a bit of a distracted and accident-prone driver (not to mention parking tickets – but, b”h, I haven’t gotten one of those in over a year. 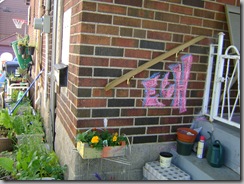 Anyway, that’s the kind of goodie-goodie that I am.  Not that I’m bragging or anything, because now I’m stuck with this stupid, stupid committment.  Erev Shabbos, yet.

Just think of me at 6:30 tomorrow morning.  I’m usually in bed then… but tomorrow I’ll be out on the 401, pushing my way through traffic and back to get to the airport by 7:15 and then to get the car home by 8:00 so Ted can take it to work so he can get home fast before Shabbos.  (he has to work ‘till 4:30 now that we’re into “summer” Shabboses – even though our shul starts Shabbos at 6:45… it’s often tight)

Oh, and the “graffiti” throughout this post was drawn by Elisheva, who is loving the sidewalk chalk this spring!