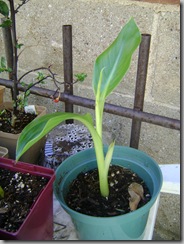 Did I mention I started bananas from seed?  I thought I had, but I’ve searched and can’t find any reference to it.

I spotted a package of banana seed at Plant World very early in the season.  I was so curious, and I do love bananas (the plants; this is a non-eatin’ variety!).

So I bought it and planted the seeds – about 4-5 hazelnut-sized black ones – in a small salad container with nice seed-starting soil.

Two have sprouted so far, a few weeks apart.  I’m not sure if I’m going to get any more.  Bananas aren’t the most fertile of plants to begin with, from what I understand.

But isn’t it CUTE? 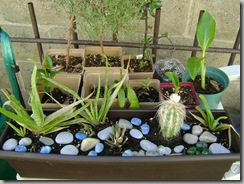 The package directions say to replant it in as large a pot as you have… the only limitation on its growth is the size of its turf.  I can definitely see how it will be too big for this pot fairly soon.

There’s another banana in the square-ish terracotta-coloured pot to the left of this one.  Much smaller, but it will catch up, I’m sure. 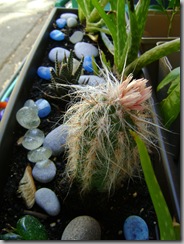 And then, finally, in the foreground… what I think of as my “Israeli garden.”

I should start here by saying I hate succulents.  Just deeply, deeply distrust them.  But we are planning and hoping and dreaming of living in a country where things are hot and dry much of the year.   Which means – if I hope to garden there, I must learn to love them somehow.

My mother gave me a tiny aloe cutting a couple of years ago and since then, it has grown and grown like crazy.  These are a few of the small offshoots (called pups!) – I haven’t moved the mama back outside for the season yet.

So I stuck the aloe offshoots into this long, rectangular planter with another weird speckly aloe and a weird hairy cactus.  I used a mix of regular soil and sandy cactus soil (because I didn’t have enough cactus soil left).  And then Naomi and I decorated it with some pretty rocks a friend gave her (which she’ll probably make me give back at some point), and then I watered it in and DONE!

A succulents garden which I am training myself to stare at every single day and think, “Israel.”  It’s almost like a little zen garden.  I am training myself to be happy for this little garden whenever the weather is hot and mercilessly dry (luckily, we’ve only had a few days like that so far).  Eventually, I may add one or two different types of succulents, just to vary things a little.

The hairy cactus has had this flower sticking up since I brought it home from the store in January.  The flower stayed exactly the same for months but now that it’s been out in the rain, is starting to look a bit dishevelled.

The thing about taking aloes outside:  they HATE it for the first couple of weeks.  Maybe if I did a process of hardening-off, they wouldn’t be so traumatized, but I realize it’s almost impossible to kill an aloe, and besides, I am WAY too busy to coddle plants.  So the first few weeks, they sulk.  The aloes turn brown and look like they’re going to puke.

I don’t blame them.  From a place of neglect and dim light on the windowsill, suddenly they are in a LOT of light (relatively speaking) and also, it’s spring and it rains a LOT.  It’s true that if aloes get too wet, they will simply rot away.  But we haven’t had that much wet and this is the second summer they’ve pulled through just fine.

Wow – what a lot to say about just a few plants!