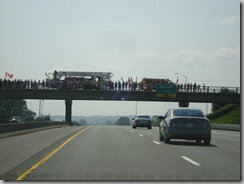 Join the parade:  highway of heroes

Driving home yesterday afternoon, every single bridge between CFB Trenton and Toronto was lined with firefighters, paramedics, veterans and civilians, waving Canadian flags or “Support our troops” banners, all waiting for the procession accompanying the body of Sergeant James Macneil, 28, who died on Monday in Afghanistan.  According to the news, he just got engaged on Sunday.  This was his fourth tour of duty in Afghanistan.  More details here.

I had heard of people lining the bridges for the processions, but didn’t quite realize the magnitude of the phenomenon.  It really did feel like we were participating in the world’s longest parade; quite festive, in a weird way.  Many of the firefighters were standing on top of their trucks.  Lots of other people were just pulled over by the roadside, including people in military gear, I guess so they could salute him as he went past.

It was hard to explain to the kids what Canadian soldiers are doing in Afghanistan in the first place.  I kind of said that just like soldiers protect people here, sometimes when there is something very bad going on, they have to go to other countries to protect those people as well. I believe it’s true; I hope it made some kind of sense to the kids.

To them, though, it really was just a parade – just another sight along the way to help pass the time.