Me, a la Magnadoodle 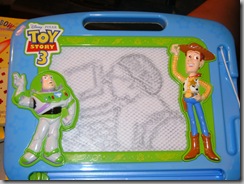 So why does GZ have a magnadoodle?

It turns out he loves to draw, but does NOT love making pictures.  Maybe he just enjoys the process?

He’s always said no to crayons, markers, etc (he will paint, but mostly just paints with his watery brush instead of using the colours).  But one day he got ahold of one of Naomi Rivka’s wipe-off writing notebooks and, flipping through it afterwards, I noticed he’d coloured in every single HAT in the entire (10- or 12-page book).  That’s  a lot of hats!

And my theory is that he was willing to colour because he knew it wasn’t permanent.  Which is why, on a hunch, I chose him a magnadoodle with his gift card from Aunt Sharon while we were in Ottawa last week… and darned if I wasn’t right.  He loves the little magnetic sketchpad and the simple “how-to-draw” pictures of Toy Story characters in the book that’s attached.

The other kids like the Magnadoodle, too.  It’s a simple thing, but we’ve never had one before.  I am searching for a full-sized one at Value Village, but so far, no luck.