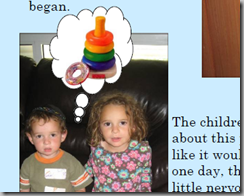 I know I’ve written about this a few times here, but I just got this week’s Torat Imecha parsha sheet and I’m pretty impressed with the way she brings the story of the meraglim in this week’s parsha down to a kiddie level.

The father in the story promises a gift to his three young children.  The kids speculate about the gift and finally, the oldest child sneaks away to take a peek.   He returns and reports that it’s too complicated for the younger kids and they’d never be able to put it all together; it will only make them unhappy.  Well, the littler kids both begin crying at the thought of not being able to use their father’s present until the father comes to explain that he had been planning to help them put it all together.  Simple, direct, in just a few pages.

Sometimes, the big kids make fun of how direct the author’s analogies are between the kids’ lives and a message in the parsha.  But I’ve found that kids appreciate that kind of blunt correspondence and don’t see it as unsubtle or “talking down” in the least.  In fact, they may feel very grown-up at being entrusted with a “mashal” of their very own.

And that, I think, is the core of it for me.  As Jews, we often learn through mashal and midrash.  While no midrash should necessarily be considered definitive (see DovBear’s post on “lucky” midrashim here), and should certainly not override the imperative to understand and grapple with the pshat, I think it’s wonderful to introduce kids to these little midrashim they can understand so well.  Chanoch la’noar al pi darko…

As I’ve mentioned before, you can check out sample Torat Imecha parsha books here.

However, there is an online subscription option, which is very reasonably-priced (you buy the right to print one copy for your own use – you obviously can’t redistribute it, ie email it to all your friends), she is taking a break for the summer starting in a few weeks, so there isn’t much point to subscribing now.

At some point if and when the project is complete, I’d love to have the option of buying (via email) either selected weekly parshiyot OR buying directly from her some kind of printed and bound copy of every single parsha.  Meanwhile, I guess we’ll be going back to My First Parsha Reader (and Tell Me the Story of the Parsha, which we have in Bamidbar – bought for a quarter at the local library!) over the summer.

Also, through a mention over at Homeshuling, I discovered this cool little kids’ parsha craft site, Parsha Projects.  Her project ideas are also available at the new site Challah Crumbs, which bears looking at in a bit more depth.  Some of them look great!

This week’s parsha craft is a textured map of Israel… particularly apropos, I think, given the flotilla controversy.  We may actually attempt it!