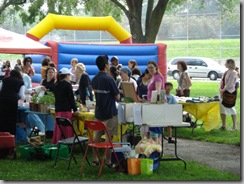 Thanks to a couple of dedicated mamas, our first (of many, I hope) neighbourhood funfair took place at a small local park very close to our house.

I ran a Kosher Bake Sale table, selling buns, muffins, brownies and Ted’s famous Triscuit mini-pizzas, and surpassed all of my wildest expectations, selling just about every baked thing I brought to the park.

I was glad there was a kosher presence at the funfair – that’s why I volunteered to do it.  They were asking people to contribute 10% of their profits to cover the park permit and expenses, but I gave a little more than that, plus I paid Elisheva something for her tremendous and cheerful assistance all afternoon.  (you can see her behind our table in the photo above:  she’s the one in the white ballcap and long pink skirt)

My plant sale went a little less well, but I did sell a few potted daylilies and tomatoes.  Forgot to write the varieties on the pots and they got all mixed up – oops!

The mamas running the event were SO organized:  the table was all set up and waiting, with a tablecloth even, when we got there.  All I had to do was plunk our stuff down and start selling okay, we did end up bringing our own folding chairs from home).  They had a nice variety of booths, including henna, face painting, some lovely shirts and skirts, jewellery, comics, and (right next to us) hair accessories.

Face painting for the littles: 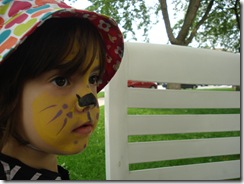 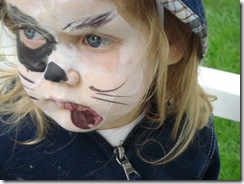 I’m SO happy Naomi’s gotten past her fear-of-face-painting stage.  Gavriel Zev seems to have never had one, though last summer we mostly settled for having his hand painted because I feared he’d be too squirmy to sit through a full face-paint session.

Of course, despite recent fearmongering, no neighbourhood event would be complete without a bouncy castle: 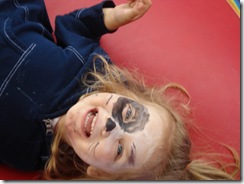 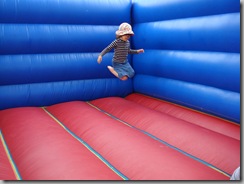 Facepainting was free, but they had to get a $1 handstamp for the bouncy castle, games, etc.  Very worthwhile, I think.

Oh - there was also a terrific – if brief – concert by my sister Abigail and her friend Shira, as well as other music throughout the event.  They were supposed to have a more sophisticated grown-up concert at 8 this evening, but thunderstorms came up and rained them out.

Tug of war for all ages!  Big men vs little kids (a very close one; the kids are weak but HEAVY); teenagers vs… hmm… I don’t remember what this one was, but YM, now castless, enjoyed himself. 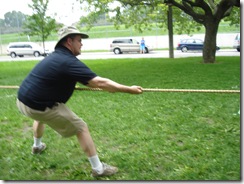 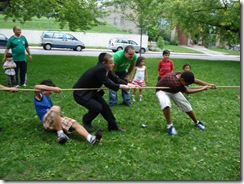 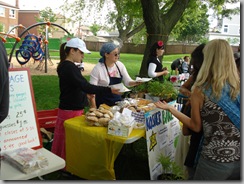 But mostly, what I did was stand around all afternoon selling bread.  My sister Sara has lately been selling her bakery’s artisan breads at a local farmers’ market, and says in some ways it’s her dream job:  sitting in the park, talking to strangers about bread.  She’s right (in small doses, I think).

It’s amazing:  baked goods are PROPS.  I know all these people from the neighbourhood, but I’m so socially awkward that I can’t usually manage a normal conversation, just stand around and stare and not know what to talk about.

Why didn’t I realize this before?   If you have a table full of delicious muffins (“only 50 cents each,” or, as I joked but everybody took me seriously, “special; 2 for $1”!), you’re automatically POPULAR!  People come up to you and strike up conversation… sometimes, they even feel they must buy something because they know you a little bit.  They talk to you about bread, the weather, the funfair.  (more about my bread here!)

I think I’m going to walk around all the time with a tray of muffins; get one of those wearable trays that fit around my neck like old movie-theatre or baseball-game snack-sellers.  “Yup – fresh today!”  “Nope – no dairy!”  “Sure, they’re zero calories!” (nudge nudge)

Either that, or I’ll go to bed tonight dreaming of our next neighbourhood funfair.  Kudos to Ellie and Catherine, the mamas who arranged it.  If you live anywhere near here (the newly named Arlington Village), get yourself to the next two on July 25 and August 29!  Oh, or check out updates at their new blog here.