However… Cranky Complaints-Lady, Part 2: in the berries! 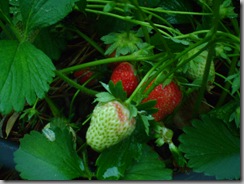 Strawberries.  They are important.  They are pretty much the reason my kids love to hang out with me while I garden.

So last spring, I dug out and gave away a whole bunch of delicious but overly runnering June-bearing strawberry plants so I could replace them with what were supposedly delicious all-season (everbearing) strawberries, a variety called Seascape that had, according to the catalogue, “superb flavour.”

Except they don’t.  Frankly, they’re kind of yuck.  Why?  I dunno, but I don’t think it’s anything I’ve done wrong!  Look again at how carefully I planted them!  And we just mulched them over with fresh pine needles a few weeks ago (needles I lovingly gathered myself by hand under pine trees at a local middle school).

Anyway, I wrote to the company, hoping, not for a refund (a year later), but at least for some advice about what I could do to fix these unsatisfying berries:

I bought 24 of these strawberry plants from you last year (planted in Spring
2009), and they are doing great.  We didn't get much fruit from them last
year (partly because an animal started using the berry patch as its
litterbox, so we couldn't eat any!).  This year they're protected by chicken
wire and they are growing:  healthy and beautiful, with plenty of berries.
However...
I was disappointed to discover, when I finally got to taste one, that they
are just not good berries. With none of the sweetness and complexity of my
June-bearers, the Seascape are just plain watery, with a tragic hint of
strawberry flavour in the background.  I don't believe the weather or the
soil are responsible, since I still have a few delicious June berries coming
up nearby (pulled out most because they were spending their whole time
suckering, not making berries!).
Granted, the first few Seascape berries we tried were probably underripe,
because we were just so eager to try them (I garden with my kids). When
those first berries tasted so-so, I dismissed it since I figured they were
not ready yet.
But this morning, after a few days of not picking, there were plenty of
bright-red, soft berries. They looked great, but were not so great to eat -
certainly not the "superb" flavour I was hoping for.
Since I garden with kids and wanted everbearers to give us a steady (if
small) supply of tasty berries to get the children excited about spending
time in the garden, this is doubly disappointing. And unless someone there
can suggest something, I'm probably in the market for a new everbearer...
:-(

I also left a negative review on DavesGarden.com, which, if you don’t already know about it, is a goldmine of extremely practical gardening information!  The PlantFiles section alone has become my go-to guide for almost any kind of plant.