Today was K-day: the first time I’ve eaten kale! Ever!

Naomi and I have been growing some – in a head-to-head kale-growing competition, one $1.49 four-pack planted in a tub at the side of the house and one in a sub-irrigated planter at the back (no pics of either; sorry!). Weirdly, kale has been the only veg to grow better in a non-sub-i planter (ie a traditional POT, albeit a big one)… perhaps it prefers to dry out between waterings?

Anyway, today was Kale Harvest Day. I took as much as I could without killing the plants: 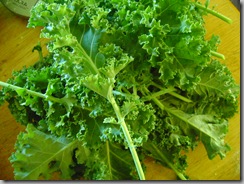 The Vehicle for kale was a soup… White bean, Garlic and Kale Soup. I suppose you could call it Tuscan, or Portuguese, if you wanted to make it sound even hoity-toitier. In honour of a vegan blog visitor, and because the idea of a dairy-free soup appealed to me today, I left out the butter and made it with olive oil instead.

I also decided to pre-roast the garlic, rather than fry it, but unfortunately, I think I had the oven too high (400) because it started burning before it had softened and sweetened up properly. Next time, I’ll plan ahead and keep the oven nice and low to let the garlic really get yummy. 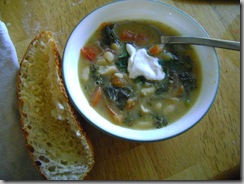 I made a loaf of basic Artisan Bread in Five no-knead boule to go along with the soup, and basically, that was it.

I can see adding corn on the cob (on the side, not in the soup!) to this meal once we have fresh, in-season corn, but basically, this is the perfect rustic supper: hearty loaf, hearty soup.

Here’s the soup recipe. Easy, easy, easy. I like it particularly because you set aside some of the white beans and broth to purée together, which gives the soup a nice thickened texture without adding either extraneous starch (normally, I might use flour) or dairy ingredients (like milk or cream).

I also like the fact that there are tomatoes in it, but it’s not a tomato soup. Tomatoes so readily overpower whatever you cook them in, but this soup maintains its creamy whiteness and mild kaley flavour, thanks to the hearty bean base. It’s not often that I add a new soup to the repertoire, so I’m kind of excited. Also a great intro to kale for the kale-wary.

Somebody said that it was pretty much like spinach, but I think it’s much milder-tasting. I don’t love spinach unless it’s very subdued inside a quiche, frittata, kugel, etc. I would never try to make spinach soup.

We actually found this recipe when I decided to do something with kale yesterday, and told YM I was thinking of white beans with it. He jumped on Google and immediately replied – “soup!” So here we are… soup.

Of course, then we had to go and butter the bread and drop a dollop of real sour cream on top of the soup. Still… if the point is learning to cook fresh, local, delicious and slightly less animal-dependent food, then I would declare this evening’s supper, as Borat would say, “GREAT SUCCESS!”

Like I said, the plants are still out there, so there is still a chance for further kale experimentation, as long as they keep up their leafiness even as the weather heats up…