A name by any other rose 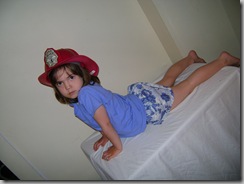 Andrea at Are You Listening?, a blogger I’ve visited a few times through IComLeavWe, wrote about nicknames today… the nicknames she swore her kids would never have.

The scary part is the evolution of the nicknames.  Like Elisheva’s, which started out as “Elisheva-beva-boo-roo.”  These days, I mostly call her “boo” or “roo.”  Because who could say that whole thing every time?  We have also taken to calling her “Rochel Faigie,” because she said she was tired of hearing me call her name to do things, so I made up a totally different name.

Naomi’s full nickname is “Choochabee-pone-pone.”  (Don’t ask!)  And Gavriel Zev’s started as
“Chicky-Boy” because I was calling him “boy chick” before he got his name… and then realized it would be way cuter if I reversed it.

Sometimes, the nicknames don’t stick.  YM’s first three nicknames didn’t… “turtle” (for his beak-like sticky-outy upper lip), “honey guy” (for his golden glow in certain lighting), and “pecan man” (for his wrinkly newborn nut-face).  I guess I was strictly amateur at that point, because most of the names ever since have stuck pretty hard.

Not that anybody else calls the kids by their nicknames.  Because nobody does and, frankly, I don’t think I would let them.  After all… their names are precious, well-chosen and all that other high-falutin’ stuff!

Just thinking to myself, “did my parents ever call me anything?”  And I remembered my mother calling me “Jennie-doodles.”  Everybody else sometimes called me Jenn.  But like I’ve always said, I really can’t stand any variation on my name.  Hopefully, nobody from my family is reading this or they will simply continue to mock me. 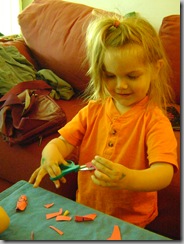 In other news, GZ learned how to cut!  With scissors! 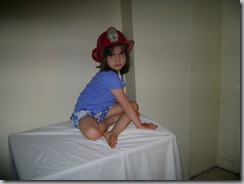 And YM, for his technology course, had to take a series of portraits of Naomi Rivka (inexplicably on top of the freezer in various sultry poses in a pair of weird homemade bloomers).

Meanwhile, GZ continues to learn – here in his way oversized astronaut costume – that the way to overpower his sister is by pulling her hair.  You go, AstroBoy!!! 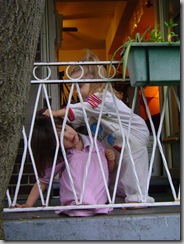 Circus festival tomorrow!  Fireworks on Monday!  I wonder if any sane family member is interested in taking my kids to enjoy either of these things…?