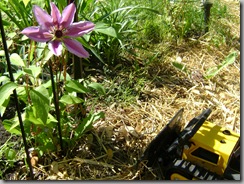 Well, who wouldn’t be optimistic with an amazing clematis like this in bloom???

I love the motif of miniature bulldozer juxtaposed with natural wonders… something about “paving paradise”, but then, I’m tired. 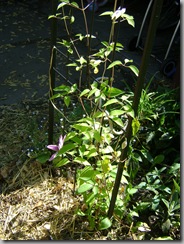 Here’s the rest of the clematis.  The story is – I bought two clematises on sale at the end of the season two years ago.  One is Nelly Moser and one is The President.  I planted them in what I thought was a good spot (feet in damp shade, head in the sun), but alas, it was too late.  They died.

Except not quite.  Last year, Nelly came back and gave me two blooms – here’s one of them.  Not a sign of the President anywhere.

This year, not only is Nelly back with a vengeance – that’s what the flower shown here is – but there is a single stem creeping up behind her that looks suspiciously darker in colour.  It won’t flower this year; in fact, Nelly is promising only one more bloom again this time, but the things have leafed out tremendously and are almost half the height of their trellis already.

So next year, we will hopefully have not one, but two colours of clematis blooms, and not two, but many, many flowers.  Not that I’m counting chickens before they hatch or anything… but you can see why I’m feeling optimistic today. 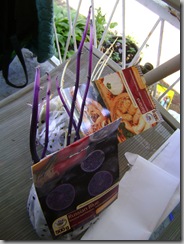 Oh, but here is a whoopsie.   This is what happens when you are too tired, lazy, hot, cold, sleepy, Jewish (Yom Tov, ya know), homeschooling, running-around, busy elsewhere to plant the potato seeds you purchased two months ago…

I love the term “potato seeds.”  I know the proper term is “seed potatoes,” but frankly, all potatoes are seeds (though, luckily, not all seeds are potatoes).

There are two varieties:  purple something and finger something (banana something?).  I bought the finger ones because fingerling potatoes really REALLY creep Elisheva out.  Why not grow something to frighten the kiddies???

More on potatoes below.  Specifically, The Potato Curse. 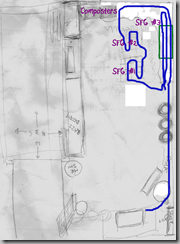 And then, finally, today – in record-setting 32 degree weather – I got my WATERING APPARATUS set up.  AKA soaker hoses.  AKA splishy splashy water-everywhere paradise.  This is a chain of three soaker hoses (two from last year, one found at the curb a few weeks ago) that not only winds through all 3 square-foot beds, but also provides a nice spritzy place for the kids to run and play and get a little cool and damp but not soaking wet.

In order to avoid leaving the hose on the ground as a tripping hazard, I strung it between the two pea-and-tomato trellises, creating a nice breezy archway just the right height for a child to run under (but probably not Ted).

(Doesn’t the backyard look HUGE in this sketch???  The three tires in the middle are from the time, two years ago, when I grew potatoes in car tires.  The experiment failed, so I declared that area a flower bed and tried the potatoes somewhere else last year… which also failed.  Blah.  Call it The Potato Curse.) 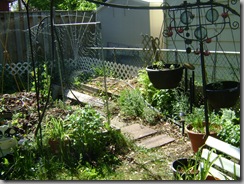 And here you can see another spot where I strung the hose between two decorations, creating a second archway and informal / damp “entrance” into the veggie beds.

I know technically that this will waste SOME water.  But it really is three or four pinpoints over each airborne hose length.  REALLY not a lot of water… I promise!

(PLUS, you can see in this picture that I have strategically positioned some garlic in planters to catch any excess drips and runoff…) 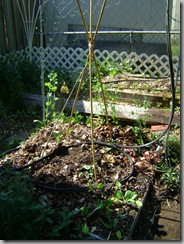 Here’s our new bean teepee!  Not exactly a teepee because there are four corners and the sticks meet at the middle.  I have read that joining the sticks in the middle makes it easier to reach the beans for harvesting.  I planted eight store-bought Blue Lake pole beans.

Yes, store-bought.  Yes, I have bean seeds (okay, BEANS!), but don’t give me a hard time.  I can either raise children OR do laundry OR grow veggies from seed.  I also bought more basil and a couple of golden zucchini seedlings, even though I have my own started-from-seed green zukes waiting to go out into the garden.  I know all that.  So sue me. 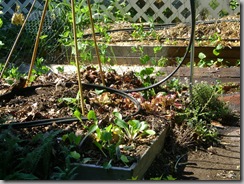 Ahh… if we have many more days like this one, you know where you’ll find me… out back in the veggie bed, resting in an easy chair under the spraying arches of hose.