Why wear a tichel when you can... 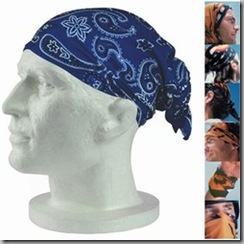 Yes, this is a frank attempt to convert all Jewish women who cover their hair to the world of BUFF performance headwear.

I discovered this thing in the quest for a tichel I could wear for Aikido class.  (Before I found out we were expecting Naomi Rivka and I didn't feel real comfy getting punched in the stomach.  Go figure.) 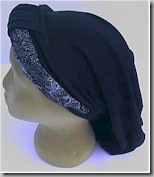 What I used to wear, most of the time, was a snood (like this one, at right).  The way my hair works (and many other women’s, if my observations are correct), when a snood starts to slip down in back, pulling it back up doesn’t work.  Pulling it back up only pulls out the frizzy clown-hairs around the tops of your ears.

So then you look like a frizzy-haired clown with a snood on:  VERY modest.  Or, I should say, I do.  The only thing that works with a snood is to pull the whole thing down over your face and then whomp it back up onto your forehead.  Peek-a-boo!

FFB women seem to be able to pull it off (so to speak!).  But I could never get the peek-a-boo thing right, and was tired of looking like a clown and interested in doing Aikido (though I have decided since that there is NO headcovering that will stand up to this and also negiah issues with mixed-sex classes and okay, also tznius issues with the gi you’re required to wear in class).

So I bought a buff.  No idea how I found out about these, except maybe some random desperate googling of various sports headwear until this thing came up.  And it has been pretty durn close to perfect ever since.

It’s a smooth “performance” polyester that – once washed and roughed up a bit - feels exactly like cotton.  (you’ll want to get it roughed up a bit so it becomes more grippy, less slippy on your head)

I have about five:  two black, one bandana print, one “jeans” print, one 2008 olympic print that is a knock-off brand and WAY too tight, and one pretty multicoloured print.  My sister Sara has at least one, in white, for her work – she’s a baker and wanted an alternative to tie-on headscarves, perhaps one that made her look a bit less like a Keebler elf.

They come in just about every colour and many pretty prints.  They can be worn alone for a pretty bare-bones basic covering, or under a hat to make sure stray hairs are tucked in.  It is absolutely the lightest, most comfortable summer head-covering I have ever seen.  Did I mention there’s no seam?  No scratching, no itching, no rubbing!

(They all do come with a fairly innocuous half-inch Buff logo at two corners; it is slightly visible when worn, so if that bothers you, consider buying basic solid colours only and wearing them inside-out.)

They are also VERY low-profile under hats, more so than anything else I’ve tried; you can actually wear your real hat size as they take almost NO room.  As a bonus, hats slip around less.  In fact, I even wear the basic black model under the basic fringed Israeli headscarf that I love.  I tried it once without the Buff and was SHOCKED at how fast it slipped backwards.

To put it on, I scrunch the whole thing up and pull it on around my neck, like a scarf (“Neckerchief” mode in the chart of configurations below).  Then, I pull it up over my face, like the “Alice Band” mode below, only just in front of my hairline.  Finally, pull the back side of the buff down, like the “Samarcane” (?) mode shown in the bottom left.  Then, twist the “tail” and tuck it in securely.  Done! 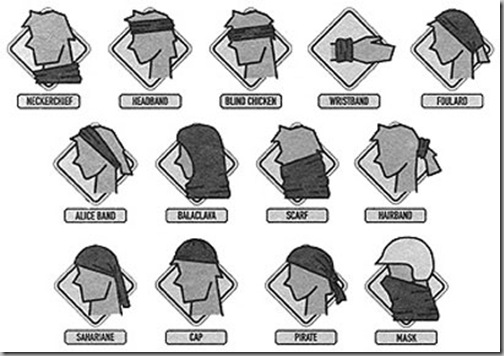 After several years, the whole process takes me only about three seconds, literally, and there wasn’t much of a learning curve before I got good at it.

I haven’t found these locally (yet!), but I don’t really shop in the kind of stores that outfit people for active bikey-sporty kind of lifestyles, so maybe there are tons available around town.

But there IS a very good Canadian online retailer, the official original online Buff store:  BuyaBuff.com.  They also sell and ship free to the US (orders over $30).  BuyaBuff.com also has this cool movie clip showing a few different ways you can wear the thing (in the privacy of your own home, because most don’t cover all the hair!).

I have also found and bought a few discontinued models more inexpensively on eBay, but I don’t see any on there at the moment.

I’m always amazed that I’m the only frum person wearing one of these.  I think this product is amazing, it has made a HUGE difference in my life, and I’d love it if it could help others to find out about it.  That’s why I’m throwing in a whole bunch of keywords here – something I have never done before, in the hope that somebody p’d off with their tichel or tichl or headscarf or wrap or hat or snood (maybe they’ll type it snude by accident?) or sheitel or sheitl or headscarf or any other form of Jewish religious modest tznius or tzniut haircovering (like the classic Conservative-shul doily!) will check in with Google seeking alternatives… and wind up here and try one.  I’m not promising it will amaze you, but for $20, it may be worth a try.

I am getting absolutely zero kickbacks for writing this, but if you buy one, let them know I sent you… and maybe they will send me along a new one for free!

Sunday update:  P.S.  I have learned a couple of interesting things I wanted to add to this post.

First, these were not unavailable on eBay last night when I posted this – eBay crashed.  Worldwide.  Weird.  It was worst in Australia, apparently.

Second, the generic name for these seems to be “tube scarf.”  There has apparently been a huge surge in generic Buffs since I last bought one, maybe two years ago. 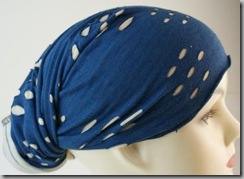 Here’s one of the knock-offs, and actually, I kind of like the “layered” look of it.  The holes are cut into the outer layer so you can see the beige layer beneath.  Of course, that would make it twice as heavy and probably less useful and flexible in other ways.  BUT more acceptable as an interesting piece of headwear on its own merits.

FYI, if you want a generic one, the listing title for this on eBay Canada is:  BN NAVY BEIGE SCARF BUFF BANDANA WRAP HEADWEAR CAP TUBE.  Catchy, I know.  Who isn’t looking for one of those?  Some of the listings also present them as “beanie scarves.”  Colourful!  Fun!  This one is just under $10, including shipping to Canada – from its present home in Hong Kong.

Just from the picture, you can tell that the edge of this is less well-finished and more frayed-looking than the authentic buffs, which tend to be fairly crisp around the edges.  There’s also a seam, probably where the two layers are serged so they’ll stay together… which kinda defeats the purpose of buying a seamless garment… but again, maybe it’s worth it (under $10, ripoff buff… hmm…) to have something kind of nifty and interesting to wear on its own.

As for the plain knock-offs, if I were you, I’d be suspicious and go for the original, though at those prices, to be honest, I’m tempted to try one just to see how bad they could possibly be for that price.  (original Buffs are around $20, plus shipping)