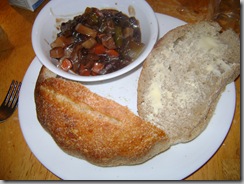 Why do we always have our heaviest meals of the week on Thursday nights, when I do my aerobics class???

Anyway, tonight’s meal was a very simple veggie stew – I realized after the fact that it was actually vegan; weird for a butter-lover like me!

(NOTE:  I’m going to put the “Read More” button here at this point, in the midst of this foodie ramble, but there is a TON of stuff that has nothing to do with food down below and a lot to do with Jewish life, schooling my kids, the friends I choose and way, WAY more, so do click the linkie and read on.  It gets great, I promise!!!)

Onion, celery, carrots, green beans, black beans, potatoes, lightly braised in shiraz, then simmered in pareve onion-soup broth, with beef gravy mix stirred in.  And a dot of Kitchen Bouquet.  Oh, and a packet of Yves Veggie Beef Strips stirred in at the end.

I know, I know, it sounds completely fake-food horrible.  But I promise it was rich and lovely, not to mention dark, meaty and satisfying.  I don’t usually do “veggie meat” products, either, though the menfolk here are big fans of Tofurky deli slices.

We’re not vegetarians, and I figure if I want meat, I’ll have meat.  But I grabbed the package at the store yesterday on impulse and it was actually a nice texture, added to the stew.

I went inside YM’s school for the first time today.

Yes, I was afraid to go, and it turned out I was dressed really schleppy, too (schleppily?).  But I steeled myself, kind of half-encouraged by a quick bumping into my friend Dini.  Dini is my “in” in the frum community; a Bobover with eight kids, she knows everybody and everything and isn’t afraid to say anything to anybody.

(Which is actually how YM got into the school in the first place, but that’s a whole ‘nother story.)

I came right out and asked her if I was too schleppy to go inside (I had on running shoes…and a sweatshirt; two garments most other school mommies probably don’t even own).  She sat and thought for a minute, very seriously, about which rebbeim were there and who I might encounter in the building.

Anyway, she wasn’t all-out encouraging, but didn’t scream or recoil in horror at the thought, so off I went.

At the building, I parked the carriage and walked up the stairs, inside, then down the stairs to the office.  Chas v’shalom someone should use a wheelchair, but I read the other day that in Paris, people in wheelchairs wait by the Metro stairs and strangers carry them up or down without comment.  Maybe yeshiva bochrim have the same ingrained helpfulness.

Anyway, I carried Gavriel Zev up and down all the stairs.

The office is a dingy hole near the janitor’s closet, but the secretary was helpful and didn’t sneer at me or anything as I paid for tomorrow night’s Shabbos dinner for YM.

I could practically feel facial hairs sprouting from all the boy-hormones in the building.  She and I were literally the only females.  Behind her desk, in the tiny office, was a door marked “Ladies’ Washroom.”  I made a mental note, because YM had told me early in the year that there was no ladies’ washroom in the building (he later denied having said any such thing).

On my way out, I peeked into the coatroom and was overwhelmed by the sea of heavy black coats.  Racks and racks of them.  Just then, YM came downstairs; he’d been alerted to our presence in the building by some kind of Psychic Yeshiva Boys’ Network.

I felt ashamed of the brightly-coloured windbreaker I bought him last week at Value Village.  Ted had looked at me like I was crazy at the time and said I should have bought him a dark coat like all the other boys wear.  Ted was right.

But at the rate that YM goes through outerwear (mostly, he wears it  a couple of times and then it’s gone forever), I’m reluctant to buy him a nice wool coat.

Anyway, I told YM, “you should wear your red jacket and hang it on the racks.”

I couldn’t see it, but I also felt kind of proud.  He may be a little tuned-out, socially and emotionally, but that can also be a gift, in that he can wear his differentness (sometimes literally, in the case of the red windbreaker), with pride or at least, resignation.  Like I said before, a parrot in a penguin world.

I love Dini so much; so constantly happy there is someone like her in the world (even if only one).  She’s my total opposite.  She’s big and bold and loud and super-confident New York FFB and confident and I am … not.  I look up to her, I admire her, and I absolutely will never, ever be her.

Elisheva makes fun of me if I even so much as mention Dini or her family, but I have come to terms with it.  She says I have a special tingly voice I use when speaking about them.  Maybe I do; I don’t mind.

I read that it’s important that our children see that we have heroes, people their parents admire and look up to.

If Elisheva mocks, that means she notices.  Normally, you can barely pay teenagers to pay attention.  And this is free, no moralizing required!

I just need to have a friend and occasionally talk about her and my teenage daughter unwittingly absorbs valuable life lessons.  Sometimes, parenting really is this easy.

I’m happy today because after this Shabbos dinner at YM’s school, he’s arranged to stay overnight in the area and walk back down Shabbos morning.  It is literally the first time since Grade Six (he’s in Grade Ten now) that he will have gone to the home of a classmate.

Not to mention that this classmate has the last name as a very prominent 20th-century rabbi.  Not by coincidence; the classmate is a great-grandson, I believe.  I’m in awe.  I think a trip to Chocolate Charm or  Moose is definitely warranted by this occasion.

What a lot of thoughts for a simple sourdough-and-stew blog post.  What a deep and complex person I must be.  Or else it’s late, I’m tired, and starting to blather on.

Hope it was great blathering… G’nite!