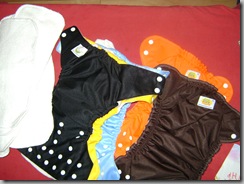 Well, it’s been a LONG time since I bought new diapers, but with two kids and not so many diapers, they do wear out.

I must say,  however, it is a LOT less exciting buying new diapers for a 2-year-old and 4-year-old when I keep thinking they OUGHT to be trained by now.  Okay, maybe not the 2-year-old, but 4?!?  And alright, it’s only for nights… but still.  Four.  A lot less cute picturing her wearing the new diapers than when she was a tiny chubby bundle.

Anyway – that’s all I’m saying about that.

This time around, I am replacing some of our worn-out Kushies Ultra (they are falling apart to the point that some of them emerge from the dryer literally inside-out, with the PUL layer gaping and the “hidden” layers flopping around outside) with a very small collection of pocket diapers:  two AMP Duo (size Large) and three Sweet Pea One-Size.

Don’t they look cute, lying there, all pristine?  I have bought so few brand-new diapers in our 5 years of buying cloth!  Most of them have been used, but I figure we don’t need many now, and, okay, I wanted instant gratification.

They were fairly reasonable (with an extra 15% off right now because of a holiday -slash- grand opening sale) from Baby Kay Diapers, a local mama (can East York be considered local?) with a cute little shop set up in her basement.

She was very helpful considering I dropped by early Sunday evening in the middle of what was probably family time.  She does have regular store hours, and is an experienced CDing mama of 2 herself, happy to answer questions, so if you are more considerate than I am, then call ahead and show up at a reasonable hour to see what she has in stock!

So now all I have to do is wash up these diapers and the liners (the AMPs don’t actually come with liners, so I have to buy microfibre cloths at Dollarama – or hunt through the sewing area for ones I probably already have)… and roll them out, probably tomorrow night at bedtime.

I was SO hoping I wouldn’t ever ever ever need to buy diapers again, but we’ve had a pretty good run of it with these way overused Kushies, and have spent zero on diapering in a very long time, so I’m taking this as philosophically as I can.  They were not that expensive, as these things go.  I just hope it’s a better “dryness experience” than my last attempt at using pocket diapers. 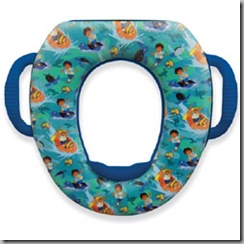 Gavriel Zev is actually in underpants full-time at home, and we have actually started making little excursions with the underpants also.  I take along a plastic bag with a change of trousers and underpants, just in case, but so far, so good.

I bought him a special new potty seat to take with us when we’re out of the house.  He’s so proud of it.  I couldn’t find one without a logo of some kind (okay, there was a plain white one, but the splash guard didn’t look as comprehensive, and a splash guard, I’m learning, is very very important), so his has Diego all over it.  Go, Diego, go!

I hate shlepping this thing all over the place.  I bought one for Naomi Rivka also, but gave up hauling it around pretty early on because she could just sit backwards or I could hold her up while she used a regular toilet.  With a boy, well, it’s just different.  Holding him up does NOT work well, from what we’ve encountered so far.  With this seat, I can tell him to lean forward and most of the time that keeps things pretty neat.