Local garlic – good for the world??? 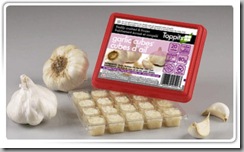 I guess I was mean to Ted because he thought my Garlic Foodie Resolution was mostly a statement about Chinese garlic, not about imported garlic altogether.  So he brought home THESE.

Sure, I love to support Israeli businesses.  But Ontario is a really, REALLY good place to grow garlic.  And garlic, unlike most Ontario produce (like tomatoes and peppers) can be stored really well all winter long.

(Potatoes, apples and squash also grow here, and also store pretty well, but not as well as garlic.)  (And the more local, organic potatoes are usually turning green in the stores anyway.  Probably from sitting on store shelves, because if they were properly stored in a dark place, there would be no problem.)

Can’t I buy something else, like menorahs or Hebrew kids’ books, to support Israel… and support Ontario farmers by buying garlic???

So anyway.  Ted went out shopping again tonight (I know – it never ends!) and returned with six of these overpackaged goodie bags: 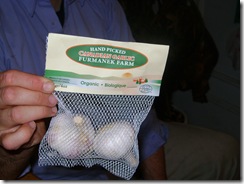 Which raises the question:  is local garlic better for me and for the world if it comes overpackaged in its own plastic fishnet-stocking carrying case?

What would be a more responsible way to sell local garlic?

Well, they could just braid it together like people used to do, but the braids might not stand up to shipping.  Loose?  Do I hear anybody saying “just sell it loose!”?

I have no idea what’s wrong with just having an open bin of local garlic.  I mean, they have open bins of Chinese/South American garlic, right?

But I guess they want to differentiate this as a “premium” product.  Plus, the packaging makes sure that the barcode gets to the cashier and you don’t get away with paying Chinese-garlic prices for Ontario garlic.  Yeah, just guess which costs more.  Can anyone say “false economy”?

Sheesh.  Why does there always  have to be this tug-of-war between good and evil?

Hey, food producers!  If the local nature of your produce is a selling point, maybe the same people who like local produce are also the ones who prefer non-overpackaged produce!  Just a thought.