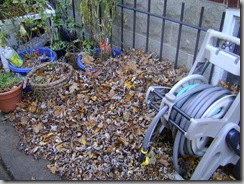 Why does the city spend money to collect leaves for free every fall?

As the years pass and I try to educate myself, I am more and more irked by the quantity of leaves I see collected in yard waste bags – or, in the wealthier, more entitled neighbourhoods, just dumped on the roads for cars to swerve around until the city sweeps up the mess.

Why are we calling this stuff “waste” in the first place???

There’s no reason I can think of why people who have leaves falling on their property can’t just keep the leaves and compost them.  Look at them as an end-of-season gift from the garden.

Trees throw tons of energy into producing leaves.  Leaves are made of energy – soil nutrients, sunlight, merged by alchemy into something marvellous and miraculous and alive.

At the end of the summer, deciduous leaves have fulfilled their destiny and are ready to die and fall to the ground.  But there is still a lot of cumulative energy in the leaf itself – why throw it away when we can easily add that energy back into our gardens for future years?

Where did we get the idea that a fallen leaf is garbage, anyway?  Are we so afraid of messes that we have to rake them away, blow them away, haul them away at astonishingly great cost?

I know the city probably does worthwhile things with all the leaves they collect.  I have certainly benefited from the free compost given out on councillors’ Environment Days; maybe some of that is made up of leaves collected from Torontonians’ yards.

But think of the cost in labour, in gas, in effort to process all those leaves into something useful!  Especially when, left alone in the backyard for a while, the leaves would turn themselves, almost without help (except from worms, bugs and microbes!), into a rich, dark mulch; not a complete soil amendment on their own, but certainly nutrients you’d pay lots of money for in a store.

If people really object to composting on their property, for some mysterious reason – no, it doesn’t smell! – they can hire a gardening company to haul the leaves away and compost them – with a disposal / processing charge, of course.  Maybe the same company that’s blowing the leaves onto the road or into the bags already.

Everybody’s going to think they’re the exception.  They don’t have space to compost – really, they can’t spare three square feet.  They’re old, they’re busy at work, they don’t have the energy (so who’s raking their leaves now?).

There are a million excuses.

If your leaves are sitting right now in a bag at the curb, what’s yours?