Latkes and Hamentashen and other FREE Online Jewish Music 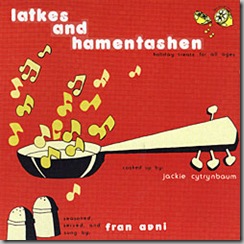 Currently listening to this album on TWO online Jewish music archives, which I am quickly coming to appreciate for the vast amount of archived Jewish music they both offer – absolutely free.

Here are the two sites:

Both archive music which is then searchable by album or performer, or you can browse through song lists.  The search features of both are similarly fickle:  plus, there’s the difficulty of not knowing how Hebrew spellings are transcribed.

When Naomi wanted to find a song we heard yesterday – Al Sfat HaNachal – I searched everywhere for it and couldn’t find it.  Turns out I wasn’t looking under “Al S’fat Hannachal”… I later found it on the Dartmouth site today (by total coincidence; I was looking for “L'shana haba” and it was on the same album) and played it to her very extensive happiness.

Both sites are also similar in that you can play music on the site itself… but none is available for download.  They want to share the music, not give it away.

I love  having access to album art – and, in some cases, photos of the original vinyl from which the music was digitized.  This stuff is precious, and I do hope that newer Jewish music will continue to be archived to services like these.

Surprisingly, though both databases are operated by universities, neither is located in what I’d consider a busy centre of Jewish life.  Still, kudos to both for hosting them and making these services available.

The Dartmouth site requires users to sign up and obtain a password.  I just got mine a couple of days ago, so I haven’t had a chance to explore to what extent the two databases overlap.  The Dartmouth one seems to offer a broader selection, and more Israeli music, but that could just be my initial impression.

So why do I like this album so much?

It’s a weird one, that’s for sure.  Chanukah and Purim songs in a mix of English and Hebrew… and most of the songs themselves are pretty typical, though Avni’s voice can be on the shrill side sometimes (my older kids call it “shrieking”).  And I’m not sure I agree with her qualification of Antiochus as “not a good king, nor a bad king… he was just a silly king.”

Silly?  Ordering at his minister’s whim the destruction of an entire people?  “A silly, dilly king” indeed!

But what I do love is mostly the fact that Avni takes this opportunity to present Chanukah and Purim together.   Yes!

Chanukah gets so much of the spotlight, and Purim so little… I see this album, with one little chag on each side (okay, not on the CD version, or online), as the perfect way to right the wrong and give each “miracle” festival its proper due.

I wish every Chanukah album out there were required by law (Jewish law, maybe!) to include at least a few songs for another Yom Tov – maybe toss in a couple of Shavuos ditties, or a Rosh Hashanah medley, just for balance.

A long time ago, I read somewhere about a mother who was asked to go in and explain about Chanukah at her kids’ (public) school.  She agreed – but only on the condition that she be allowed to return for another holiday at another point in the school year.  What an amazing condition.

I would be much happier with the widespread acknowledgement of Chanukah in our secular society if people would also wish us a “happy whatever-it-was” at other times of year.  (It would just about knock my socks off if a  non-Jewish friend said something without prompting!)

Anyway, Latkes and Hamentashen is a cute album that I remember enjoying with the older kids.  They sang the Maccabee song, Cleaning the Temple, and a few others in daycare.  (though I think I never need to hear the “Oy, Oy, Uncle Mordechai” song ever again in my life)

And now you can listen to it free – online!  Check it out!