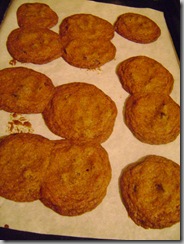 A couple of weeks ago, we made  chocolate-chip cookies using Earth Balance, a “healthy” new margarine alternative.  They turned out really, really badly.  Monumentally badly; we pretty much had to throw them away and start over with Fleischmann’s.

So I wrote to the manufacturer, who wrote back that for some reason unbeknownst to their top scientists, their product works exactly the same as regular margarine in any recipe except in chocolate-chip cookies (shouldn’t it say so on the package?)… in which case, they suggest using “1/3 more Earth Balance than called for in the recipe, baking the cookies at a slightly lower temperature for a slightly longer period of time.”

But in the interest of fairness, and also because I desperately needed chocolate-chip cookies last night when we were all out of Fleischmann’s, I decided to try again.  We had exactly enough Earth Balance to make up the 1 cup needed for our regular cookie recipe.

(it’s from the Crisco package, and I used to use butter-flavoured Crisco until they made it dairy a couple of years ago)

Well, not bad, not bad at all.  They ought to print the chocolate-chip cookie exception right on the package, because the revised directions really do work WAY better, if not perfectly. 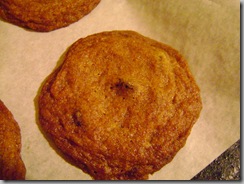 The cookies were still a bit oily.  They had the same strange “sheen” when first removed from the oven that the last batch had, though it was not as pronounced this time around.  They were also very dark on top, more so than our regular cookies.

So okay… it’s not butter.  But these are definitely acceptable chocolate-chip cookies, if still not as tasty and wonderful as our margarine ones.

The trade-off, presumably, is that these are made with a blend of oils rather than icky old hydrogenated fats… and so we will live longer and thus consume more over a lifetime and so they will probably still (eventually) do us in.

I also didn’t make a note of the price of the Earth Balance versus margarine.  But price is not as important as taste, in my opinion, because in any event, home baking is SO much cheaper than buying pre-made kosher bakery baking.  Like maybe $5 for two dozen big cookies instead of $6 for a dozen measly greasy horrible ones at a bakery.

Ultimately, I may compromise and leave the Earth Balance for pareve breads or cakes… while making cookies either with straight canola oil (cake-mix cookies come out very nicely with just oil) OR from time to time using Fleischmann’s.

It would be very interesting to see how Earth Balance performs in our Pesach baked/frozen chocolate-mousse cake, which really contains too much margarine to make often in good conscience.  Last year, I mostly made the Chocolate Olive-Oil Mousse instead, which we all love and contains ZERO margarine.

Anyway, it would be kind of a moot exercise, because Earth Balance will not be available to us at Pesach time.  Still… just out of curiosity, that may be the next experiment in this series!