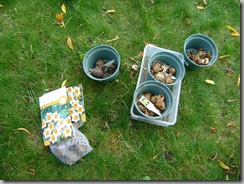 Bulbs in – some 200-something of them, by my estimation.  That includes teeny-tiny bulbs like squill and muscari, though, some of which I just dumped into holes, set upright, and covered over again.

Frugal gardener tip:  in late spring, buy pots of wilted daffodils, crocuses, hyacinths, whatever (just not paperwhites or tulips).  Home Despot usually has a cart of them for $1 or something.  Choose the pots that have the most flowers sticking up.  Don’t worry what the flowers look like… they will look horrible; that’s why they’re $1.  (but do choose colours you can live with!)

Now just leave the plants to die.  Not total neglect:  I kind of set them out in the backyard so they can get some rain and sun, but eventually, the foliage dies back and dries out and then the bulbs are ready to pull up.

Yank them out of the dirt – toss the dirt part on the composter.  Gather all the bulbs.  If you’re lucky, the pots have tags showing you what kind of bulbs are in each pot.  Keep the tags with the bulbs, if possible!  If you are planning to plant them the same year, in just a couple of months, there’s no need to do anything special to store them.  You might want to keep them somewhere cool and dark, and not too moist or they will either rot or sprout.

Then, in fall, on a nice, sunny-but-cool afternoon, take out the bulbs (I hope you remembered where you stored them!) and plant them exactly the way you would plant bulbs from a package.  Root side down, which is the hairier side.  Pointy side up.

Depending on what you buy, you can get a lot of bulbs this way for really, really cheap.  Like instead of 5 daffodils for $2 (which is a decent sell-off price at the end of the summer), you might be able to get 10 or more for the same amount.  Plus, if the plants aren’t fully dead when you buy them, you get to see the exact flower colour, so you know exactly what you’ll get.

Other plants are available the same way.  Cannas, for example, which I don’t like much, were selling off for $1 at Lowe’s.  They were already pretty much dead, but you can cold-storage the rhizome (bulbous root storage organ, like ginger) over the winter pretty easily and then, following instructions available just about everywhere online, you’ll have super-cheap Cannas in time for spring.

I wish I liked them!

Oh, and in case anybody was hoping I would get a real moral lesson in procrastination – along the traditional lines of “never put off for tomorrow” – when I contemplated putting in the bulbs last Tuesday but decided to wait ‘till Sunday and hope for good weather…?  Well, the weather was fantastic!  What a sunny, warm, beautiful day!

Today was the kind of day where the whole world was out walking, and they all walked right past our front porch.  Yay!  The kind of day that makes you love being in the garden… even if it’s just to pull out all the dead stuff and scoop a little poop.

Other garden tasks for today: 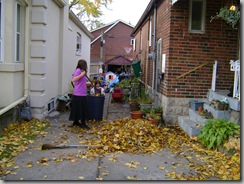 This one actually had to come before the bulbs.  I mean, you can’t plant bulbs if you can’t see where they’re supposed to go because the whole thing is covered up in slimy leaves.

Elisheva offered to rake the yard for $5.  I wanted to only give her $4, but she worked really hard.  Once she started complaining that it was too much work even for $5, I told her she could stop anytime; whatever she thought was reasonable… so she finished the job cheerfully!

I did a little more afterwards, once we came home from the NFB workshop.  Naomi inadvertently left a huge pile of leaves on the neighbours’ sidewalk that I didn’t think they’d appreciate, plus, I wanted the lawn super-bare so I could overseed (see below). 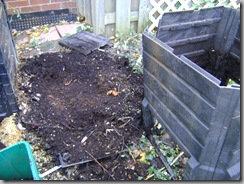 Moved the right-hand composter which held the almost-finished compost.  I decided it pretty much was finished, or at least, whatever isn’t fully broken down will disintegrate over the winter.

Speaking of broken-down, the composter is actually broken!  During a particularly vigourous turning session, I cracked open one of the corners and broke it.  I don't think it can be repaired (it's cracked where a screw is supposed to go in, and now the screw doesn't hold).  I’ve just put out a notice on Freecycle; let’s see if someone has one to give me. 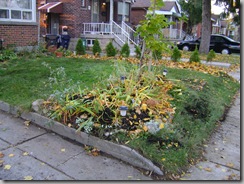 Anyway, I scooped up the compost and there was enough to apply a nice, thick layer to each of the square foot beds plus the front island and foundation beds.  Yaaay!!!   (you can’t specifically see compost in this picture, but you can see a nice dark brown around the base of the irises, I hope!)

(I told a passing non-gardening friend who was out walking with her kids all about this and she utterly failed to get excited.  I think her comment was, “that’s terrific.”  One of those generic things you say to make someone stop muttering the really dull thing they are telling you about dirt.  This interchange made me happy; it convinced me I’m still a gardening geek despite my recent dislike of the garden.  Just as it’s impossible not to love a garden in June, I think it’s natural to hate it in fall!)

Meanwhile, the middle composter is still full to the top.  That will be the spring application of compost!  And then the whole process will begin again. 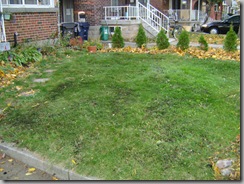 Over-seeding with the last of the EcoLawn seed, over-sprinkling with dirt (cheapo tip:  to cover your overseeded lawn in fall, use loose dirt from planters of annuals that have already died), and raking the whole thing together so the dirt and seed are more or less evenly distributed over the bare patches.

(advanced extra-credit tip, for super-cheapo gardeners only:  use soil from planters of annuals that you found at the curb – that’s what I did!!)

Everybody thought I was crazy when I newspapered the entire lawn last year, but I think, a year and a bit later, the lawn is looking extraordinarily nice.  Green!  Greener than some others on our street?

I don’t necessarily want to be a “lawn” kind of person, in the sense of all cropped and proper.  I want to have a lawn that we mow twice a year, looks shaggy and green and conserves water.  I also want a lawn where we can sit and the kids can play.

The problem with our lawn this past year, besides the rampant clover trying to dominate the front-yard ecosystem, was WORMS.  I don’t mind worms in compost; I don’t mind worms under the soil, but apparently now that I have started improving the soil, or at least, not compacting and killing it as the old owners apparently did on a regular basis, there are so many worms that apparently they like to come up and say hello… uncomfortably close to where we’re sitting.

We also had quite a few slugs, which I discovered each time I’d go to rip out some of the clover.  Slugs, clover… in cahoots.

So what can I say?  It was a beautiful day, maybe our last for a while.  Working hard in the compost, digging the dirt, grubbing around getting filthy, making the kids sweat a bit, shlep a bit… and loving it all!