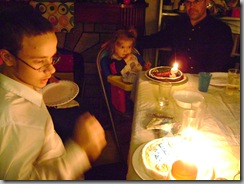 When it’s somebody’s birthday, our family goes around the table offering brachas (okay, more correctly brachos, but I say brachas) to the birthday person.  Tonight, we went around twice, once for each birthday boy, and each time, Naomi Rivka played shy and refused to say anything on her turn.

But afterwards, she got out of her highchair and went to whisper something in each boy’s ear.

At bedtime, I told her how lovely it was that she’d gone to talk to them and how special it must have made them feel that she was saying a special happy birthday to them.

“I said, ‘Gavriel, you don’t colour well.’  And ‘Yerachmiel Meir, you go to school every day for twenty hours.’”

Oh-kay.  Just another one of those special moments between sibs! 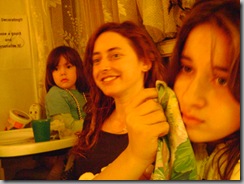 Here’s another:  while Sara was speaking affectionately to YM, Elisheva pretended to get all verklempt and eventually ended up mock-sobbing into her serviette.

I don’t care!  Let them think it’s a stupid custom.

I want them to grow up knowing birthdays are about more than gifts.

Lucky thing, that, because it was a lousy evening for gifts!

Abigail brought a present for YM (gift credit card for online or Apple Store purchases – ipod apps and accessories, of course).  To be most fair, Sara is taking YM rock climbing again as his gift.  And to be even more fair, several gifts have already been given:  YM’s hat was a birthday gift from my mother, his iPod from his other grandmother, and Gavriel Zev’s gift from my mother is another year of zoo membership.

Finally, to be very, very, very fair, more fair than fair, I have been railing for a couple of years about how we don’t need more STUFF.  So I think Sara was having a conundrum about what to get for the Baby Who Has Everything without upsetting his inconsistently eco-mama by filling up her house or fireplace with even more toys.  Stuff!

She also said I’m very picky about clothes and toys, though quickly added, “and rightfully so!”

Speaking of which, Ted and I still haven’t thought of anything for YM!  Aaaagh!  Almost a week late with his gift.  But I refuse to succumb and just buy more iPod stuff! 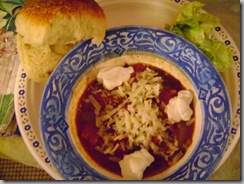 ~ Homemade Pain Rustique rolls – see how mine is sneakily trying to nibble my bowl in this picture?  (I’m back on the bread wagon!  Read all about it here!)

~ Veggie chili – many, many beans and tomatoes and cheddar cheese and sour cream – yummy!

~ Side salad (I made Sara toss it with dressing and croutons and parmesan, rather than just naked lettuce, so it really did feel like a Special Occasion!) 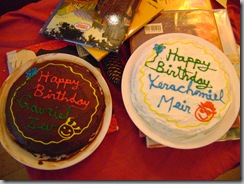 ~ Haagen Dazs ice cream in Dulce de Leche and Chocolate Mint courtesy of Mr Big Spender who ignored my order to “just get a big tub of whatever’s cheap!”

I love you very, very much.