At last, a non-bread supper! 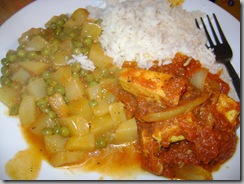 I got inspired in the Asian-foods section of Fortino’s today.  The truth is, I was going to make Poori or Naan to go with this meal, because we love LOVE Indian flatbreads, but… I got lazy – slash – time got away from me.  Long story short:  it didn’t happen.

Instead, we had basmati rice with Aloo Mattar – potato/pea curry with (gasp) a jar of store-bought curry sauce, along with totally homemade Paneer Darbari – curried “cheese” in tomato sauce, with chunks of firm tofu fried-‘till-brown filling in for the cheese.

Didn’t feel like making paneer again, nor did I have the million litres of milk that would have been necessary to make a sizeable chunk of it.  The piece in the picture at that post is about the size of my hand and took almost two whole litres of milk to make.

I realized after everyone ate that I forgot to add coconut milk to the tomato sauce.  Did it need it?  No, and we already had one “creamy” curry on the plate… but it might have made the difference between delicious and decadent.

Ted was sitting beside Gavriel Zev trying to convince him to eat the potatoes and peas.  Ted said, “potato” and showed GZ how to take it on his fork.  GZ looked dubious but took a bite (I was amazed that he did).  Then he took out the fork and said, “potato.”  He agreed!  It really was potato.  And I think he actually ate the rest.