(caution:  pictures of worms below – not for the squeamish!!!)

In a fit of procrastination over the million and one things I am supposed to be doing this week, I went out to feed the worm bin and decided it was overfull and needed a bit of emptying and refreshing.  I’ve really only fed it about once a month, and was worried that the worms might be suffering.

But – never fear!  They are wormily thriving in the cool darkness of the garage (a highly recommended location that will probably work for us between March and November).

Here’s some of the compost I scooped out, unsifted, so the worms are still in it: 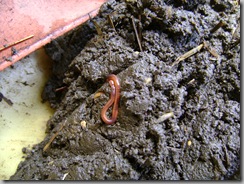 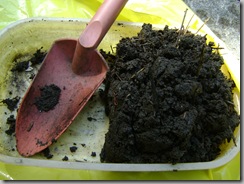 Lots of worms still left in the bin, too! 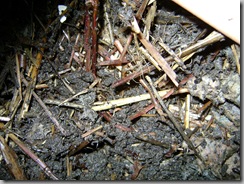 I shoved the rest of the bin contents over to the right side, and added fresh veggies (garden cucumber peel), eggshells, and coffee grounds to the almost-empty left side.  Then covered it up with “fresh” straw (it’s been sitting since last fall) and closed up the bin.  This is the easy part! 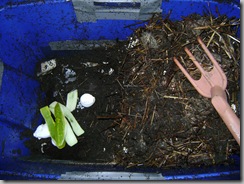 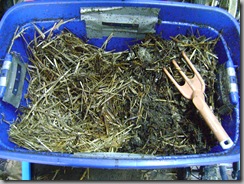 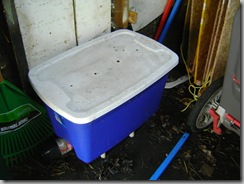 Now, to sort the compost.  Theoretically, if you scoop it into a pyramid shape, most of the worms will head for the bottom.  Then, you just “shave” off the top of the pyramid and it will be mostly worm-free.  Repeat until the pile is gone.

Then repeat with the new pile.  And so on. 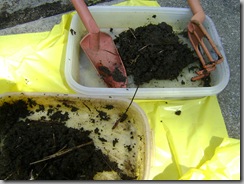 The truth is, there are WAY more worms in the bin than I need, in every stage of development (tiny babies, big fat adults, etc, which is an indicator of the health of the bin), so I can afford to lose a few.

Anyway, I’m mid-sort now because the baby woke up screaming from his nap, and the kids have swimming lessons in half an hour.  It started to rain so I put the dishes on the front steps:  I hope the worms don’t escape.

My plan is to put 3/4 of the stray worms I sort out back into the worm bin, 1/4 in the backyard compost piles.

Then, I will add the worm compost to a big bucket of rain water and let it steep for a few days, then pour it off through a window screen.  I’ll use the “tea” for the tomatoes and corn, and, once the compost has dried out a bit, maybe distribute it on the SFG beds as (desperately) needed.