Making this recipe in yet another attempt at a sourdough "challah".
It has a bit of honey, but I fear not enough for my taste... well, we'll see.  24 hours after taking the sourdough starter out from the fridge and reactivating it (twice, once last night and once in the morning), the dough is mixed and proofing on the kitchen table.  If I'm ambitious, I think I'll make the loaves tonight and let them rise a bit in the fridge overnight.
Also baking mandelbroit tonight.  Big Shabbos tomorrow, a few people from shul, plus my mother, plus the big kids will be home.
So we're having TWO kinds of meat, for a change:  pickled brisket, plus chicken thighs (I hope Ted bought thighs).
Plus several desserts... plus Naomi's lokshin kugel, if we get our act together to make it.
It's one of the guests' birthday tomorrow; just another excuse to sing our special "Happy Birthday" shir ha'maalos! 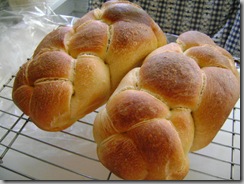 Here they are!  Looking gorgeous, but they are HEAVY, which is usually a baaaaaad sign.

The recipe says the dough won’t rise much while proofing, which it didn’t, so I wasn’t alarmed.  But then, they also didn’t rise much during the final rise, or during baking.

I didn’t slash these loaves, but it looks like steam vented between the braids, which is fine with me.  I know the cracks look unprofessional, but so what?

I am doing something wrong, I’m sure.  Sara’s back this weekend, but I doubt she’ll know… and I doubt I have the patience to bake with her using this sourdough.  She is a great baker, but oh-so-slow and methodical (you have to be, to do it professionally; nobody cares if I ruin two challahs, but you can’t afford to ruin hundreds of loaves in  your job, if it’s a job you want to keep…!).

p.s.  The mandelbroit turned out very nicely, thanks.

Hmm… afterthought:  perhaps the food processor is too violent / hot.  I think next time I will try making sourdough bread by hand, in case that makes a difference.