Well, poop AND corn.  In two separate areas of the garden.  But that wouldn’t be as good a headline, right? 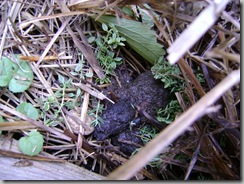 Poop:  something is pooing in and around the strawberry patch.  No berries growing at the moment, but this must be stopped, obviously, before they start (there are a few flowers right now).

I dumped a handful of thyme over the – ahem – dump, and then covered the whole mess with straw.  However, I think we may try the “marking-territory-with-human-pee” trick once again this year. 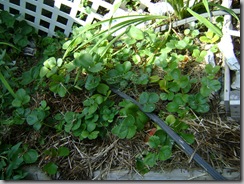 Great source of nitrogen, too! 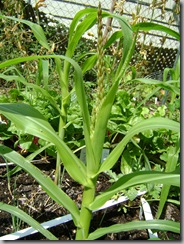 And what’s that saying about the corn being as high as an elephant’s eye?  Well, we must have the weeniest little elephants around, because this corn only just about comes up to my knees.  But it’s flowering!

This is Golden Bantam, an heirloom and – hey, looks like it IS a dwarf variety, but it’s still supposed to get to about five feet.

It’s well on the way.  And, really, I’m not counting on having tons to eat.  I just want to be able to say I’ve grown corn.

“Oh, yeah?  Well, I’ve grown corn.”  I’ll be sure to win every argument with that line!  It will win me friends and influence people.  Life will be amazing, once I’ve grown corn.