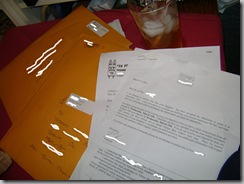 This is my MOST dreaded task of the year, by far. And, with YM going into Grade Ten, it’s the TENTH year in a row I have had to do this: beg the schools to let us not pay their $10,000-plus tuition bills in their entirety.

It is aggravating. It is humiliating.

It is worse than impending dental work for looming over my head and making me fear the pain that is to come. And the pain is always WORSE than I anticipate.

(which is, I guess, why one of these forms says to have it in by May 28 at the latest… hey, we’re not three whole months late, so I’m doing well!)

It’s not even that we’re disorganized. Despite the chaos in the rest of the house, I have all the paperwork here at my fingertips. All our taxes get filed on time, I have it all here, I have a photocopier a foot above my head on the computer desk. I just HATE hate HATE to put it all together at once and BEG.

Here I am, see me? On my knees, I tell you. Pleeeeeeeease? Either give Ted a better job so we can pay the full tuition AND let our family eat, or give us a break.

My father asked last year, “what if you just can’t afford to pay anything?”

I did threaten one school, one year, with sending my kids to public school. But, honestly? They know you’ll cough up something. Or your parents will.

When they arrive in a new place, Jews traditionally build mikvaot, cemeteries, shuls… we should have learned from the Irish settlers in North America, who first created a vast system of excellent, affordable Catholic schools.

Instead, my grandparents’ generation focused on getting their kids into Havergal and Upper Canada College. And the Jewish schools… well, the schools were, for the most part, and continue to be, haunted by a legacy of mediocrity.

Haunted by that initial infusion of cash that simply never came because we were too busy being Canadians.

Anyway: the paperwork is DONE. And waiting here for Ted’s signature. To deliver tomorrow, I promise!

And maybe next year I’ll actually have the courage to look at this stuff before the deadline.