The moments I hate cloth diapering

Baked
On
Poo.
My mother dropped by today and we went outside to get the wading pool set up.  I was serving the kiddies a picnic lunch.
I came outside, and said "something smells fecal."  (I'm so delicate!)
And my mother said, "I didn't want to say anything."  Because last week, after seeing a very critical parent in action, I thanked her for being, as these things go, pretty non-judgmental about my home, hygiene standards, etc.
But arôme de poo was a little much... even by my rather lax standards, so I started sniffing around, furious at the animal that must have invaded some part of my property.  So I tracked and sniffed and finally, arrived at... the dryer vent where the diapers were in drying.
I figured, "Ew!" and decided that I would hang the diapers after they finished tumble-drying to air the stink out.
In other words, I did nothing about the stink except hope the dry cycle would end soon... which, eventually, it did.
Later, after my mother and sister left (my sister came, too!), I went to take out the diapers to haul them outside to the line.  Got them all out into the pail, but I noticed they were not very clean... they were kind of streaky, actually.  I have never had problems with washing diapers, but figured somebody must have neglected to shake off a diaper well enough.  We have never rinsed, just shaken off the bulk of whatever's on the diaper, and gotten away with it... up until now.
Well, of course, at the very bottom of all the dry but streaky, smelly diapers was an actual poo, now baked onto the inside of the dryer.
Without getting too disgusting here (hope you're not just here for garden updates!) I scraped most of it off with a wipe (shouldn't have been in the wash anyway).  Then refilled the washer with hot water and all the bleach and OxiClean I could get my hands on, and used some of that to scrub out the inside of the dryer.  I never have cleaned a dryer, ever, before... have you?  Has anyone?  Probably my mother has.
Anyway, I re-dumped all the diapers back into the machine and started to leave when the machine began chugging right away.  It wasn't supposed to do that, becuase it wasn't nearly full yet.  So I checked, and of course, the "Load Size" dial was on SMALL instead of SUPER... because I use it on Small to rinse the bathing suits after swim class every single day.  And hadn't reset it.  Which explains why the diapers weren't clean in the first place.  This is not a front-loader; it needs all the water it can get its hands on.
Anyway, the machine's full now, on Super, and chugging away.  Hopefully we'll have some clean, non-stinky diapers, sometime soon.
Ugh.
I'll just pretend the dryer needed cleaning anyway.
Oh, yay, it just started raining now!  So glad I don't have diapers hanging on the line. 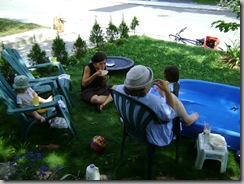 (here we all are poolside, basking in the arôme de poo… though I think it was probably cleared up by the time Abigail arrived)