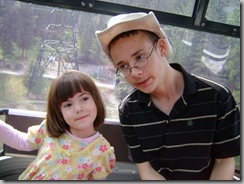 All of a sudden, she’s babbling non-stop, basically since we stepped off the plane in Calgary.  And full of the four-year-old’s incredible half-formed but wholly-confident opinions about the universe and everything within it.

There are a few reasons I can think of, including:

1) She always takes an extra half-year to start “acting her age.”  Now, six months p0st-birthday, it suddenly feels like she’s just turned four and taken on the maturity –slash- authority that comes with that.

2) Since we came back to Toronto, she’s the oldest kid in the house, and big enough to boss Gavriel Zev around now that he’s mobile enough to be her miniature accomplice in all her evil (I mean mischievous) schemes.  With the big kids away, she’s the one I chat with as I wander around doing my day-to-day stuff.  Not that I don’t talk to her normally, but I think I treat her “older” when they’re away.

Anyway, it’s mostly nice.  Though she isn’t afraid to say no, or exert her own “authority”.

Total non-sequitur:  Isn’t there a level of hell where you are plagued with fruit flies???  These things are driving me CRAAAAAaaaazy!!!