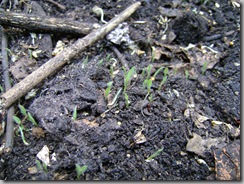 Even my compost is going – nay, growing – green!!!  Yes, I’m growing a cover crop OVER the nearly-finished batch of compost while it waits to be used on the garden beds in the fall!

I have been thinking about cover cropping for years.  Cover cropping, in case you’ve been living on Planet Inorganic (no shame in that; we stopped in there yesterday for paper plates and plastic cutlery for our al fresco Shabbos lunch!), is the practice in organic farming of rehabbing the soil between “real” crops by growing something fast and good for the world.

Cover crops are often a legume like clover, since legumes fix nitrogen in the soil (whatever that means, it sure sounds wholesome!), but sometimes they can be a grain like rye or millet.  They’re grown for a while and then turned back into the soil next season so more “real” crops can be planted.

Some cover crops are annual; planted late in the season, they don’t set seed and will die naturally over the winter so they don’t even need to be killed in the spring.  Others are perennial and have to be killed off, I suppose, presumably before they set seed, because you don’t want more uninvited generations of your cover crop competing with your real produce.

Cover crops are sometimes also known as “green manures” because, I guess, they’re green but incorporate nutrients in the soil much the same way as manure does.

Oh, they’re also great because they keep weeds off your soil while you’re waiting ‘till it’s time to plant again.  Weeds, according to the weed book I read a few weeks ago, are nature’s way of healing wounds in the earth.

So where do I and my compost piles and my minor epiphanies come in?

The big challenge for home gardeners is that clover, millet, rye, etc., are tough to find in seed form, and even if you can find cover crop seed, it’s usually offered in quantities sufficient to seed an entire field, not my three meager square-foot beds.

But then I read something, in the wise and ever-helpful gardening book, 365 Days of Gardening: A Day-By-Day Book of More Than 1000 Terrific Facts, Tips, and Reminders

Bird seed.  Cheapo no-name bags of bird seed contain… wait for it… drumroll… you will never, ever in a million years guess what’s in it.

Okay, I’ll whisper, but promise you won’t tell a soul.

She says any bag of bird seed that doesn’t contain sunflower seeds is a pretty acceptable cover crop seed.  I think the restriction is just cuz you don’t want huge sunflowers all over the place in what’s basically supposed to be a groundcover.

Actually – just had a minor secondary epiphany right this second – sunflower seed hulls are actually somewhat allelopathic… the seeds themselves may sprout, but there is a chemical in the hull that will prevent other things from sprouting and/or growing.  Another reason you don’t want sunflower seed in the mix.

If you leave out sunflower seeds, most birdseed, she says, is mostly millet, which is exactly what you want in a cover crop.

Because my square-foot beds are in use at the moment, and because I wanted to test the seed, and because it is very cool to green one’s compost, I invested a couple of bucks at the grocery store and sprinkled the compost pile with birdseed, covering it and watering it in so I didn’t just invite a whole flock of birds for snacktime.

It doesn’t look like much yet, but there are tiny pale-green seedlings popping up everywhere in the compost now!  That is actually a good sign about your compost, too.  If seeds will sprout in it, I think I read that it’s nearly done; it’s not as actively decomposing as it was at first.  Or maybe I just made that up! 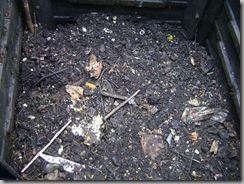 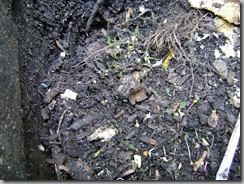