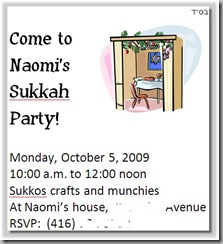 Naomi had so much fun at her sukkah party last year, so I asked her if she wanted to do one again this year.  The catch this year being that Yom Tov is on Shabbos and Sunday; there’s no good Sunday in Sukkos to have a party.  Drat!

I decided to do this last year because, most years, her birthday sort of gets swallowed up by Purim (it’s two days before).

(What to get the Two-Days-Before-Purim birthday girl?  A costume!!!) (or another costume!)

Anyway, we didn’t really do anything with friends for her birthday, so I decided to invite neighbourhood friends – Jewish and otherwise – to our sukkah.  We got great weather and everything!

This year, Sukkos has the advantage of being “early” (in quotes because it actually falls on the exact same dates as it does every single year – as long as you’re using the right calendar).  So it should be good weather.  The drawback is that a lot of Naomi’s friends will be in preschool – slash - kindergarten this year, so I am suspecting a lot of no-shows.

On the other hand, as long as they’re in Jewish preschool / kindergarten, perhaps they’ll be off school the week of Sukkos!  That still won’t allow non-Jewish friends to come, however.

Drat again.  I may change it to an evening time.  I may see if Ted’s off any day that week and switch it to his day off.  Or NOT, in case we want to go somewhere chol ha’moed.