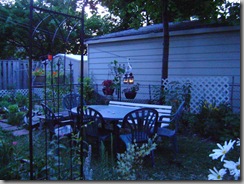 In an effort to make things a little bit nice around here for my mother’s birthday supper tomorrow evening, YM & I moved the tacky plastic table out into the garden and I hung the Ikea tea-light lanterns over it.  This is at dusk, and I think it does look a bit magical.

Unfortunately, we’ll be eating at 6 p.m., so unless the weather is unseasonably dark (maybe a storm will be brewing!) it will all be seen in the glaring light of day.

Actually, unless we figure out the umbrella, it really will be glaring, because we get quite a bit of sun-setting light from the backyard’s fairly open exposure to the west.

Still; if not “romantic” and “dreamy” I think I can hope for “tidy” or at least “not too grim.”

It has been occurring to me that the hostas thriving three feet from the veggie beds could be a message that the backyard doesn’t really get enough light to grow veggies; at least not in the back part behind the garage.  In the sunny front part where you first walk in, maybe.  Certainly, the full-sun flora are doing great there.

If we’re here for the long term, I may have to rethink the placement of the square-foot beds.

Why am I making such a big deal of my mother’s birthday this year?  It’s not a big birthday.  But it is her first in over 40 years – way more than most of her life – without my father at her side.

I really want her to know she’s not alone.

I am really scared that this birthday will suck, that the dinner will suck, that we will all sit there remembering her birthday last July when she was sulking because I refused to call it a “party” because it was the Three Weeks.

And my father wasn’t feeling well, but doctors kept saying it was nothing. 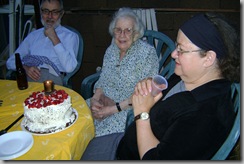 And we came home from Elisheva’s visiting day waaaay late so it was late and almost dark outside when we started and everybody was exhausted and starving from a day on the road.

Those were the good times, apparently!

Sara and her then-boyfriend worked hard to make a yummy chocolate / cocoa nibs cake with real whipped-cream icing.  And then I didn’t have a proper candle, so I stuck a Shabbos light on top.

Two of the people in the picture are dead now.

That’s a lot of pressure for a “no-special-number” birthday… off to marinate the chicken for tomorrow night!