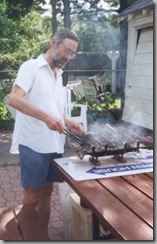 My mother's birthday is coming up on the 14th, and I had what I thought was a stroke of genius:  a BBQ!

She has one already that she got secondhand a few years ago and put some time into kashering, but flames shoot out the bottom, so she has to make sure the canister is well away from the cart, which kind of defeats the purpose of the cart.

But, to me, the BBQ seems like so much more than a THING at this point in her life.

First, because for much of our lives together, barbecuing was my father's "thing".  Mainly because he had such a horrible little hibachi BBQ that nobody wanted to go near the thing.  I will say that It was cast iron, NOT the cheap stamped-metal ones they sell now.  However.  It was still crappola as far as I was concerned when all my friends had REAL bbqs that ignited with a button, not with ten minutes worth of stacking the coals into a magical pyramid shape.

My mother's parents sometimes offered to buy my father a "real" BBQ, usually, I suspect, while they were waiting for the hamburgers that would come off the tiny grill three or four at a time.  He always refused their "kind" (but perhaps a tad self-interested) offer.

When we came to live with them after the divorce, he bought few cheap round charcoal grills, the kind that stands on a tripod.  One was for when I came over, to be kosher... I believe one was vegetarian for my sister.  There were also a couple of the cheapo stamped-metal Canadian Tire hibachis along the way somewhere, like in the picture above.

The real estate sign in the picture, by the way, was there to protect his precious picnic table, (a whole ‘nother story, for a whole ’nother day).  There was another real estate sign, or perhaps a political campaign lawn sign, for fanning the coals.  Both an important part of a BBQ day with Daddy.

Anyway, none of the cheapo bbq’s worked very well, and I think I even hauled my Weber Q over there a few times just to avoid the pain of waiting forever for food to come off those cheesy grills.

It's not that I’m a snob about gas vs charcoal - I now know that there are terrific, modern ways of dealing with charcoal.  But my father's way was so arcane, so obscure, that nobody else could do it properly, so all the BBQing fell to him.

(Just one example:  As a child, it was often my job to "put out" the coals so that he might save them 'till next time.  That involved dumping the coals in a single layer on the dirt, away from plants, and hosing them gently off, in a spiral shape, towards the centre, gradually cooling them all off so that we could pick them up with the special tongs and transfer them to the coffee canister in which they'd await our next family BBQ.  It was years before I realized you could buy brand-new coals if you wanted to.)

Anyway, a few years ago, somebody gave my mother a cast-off gas BBQ.  She kashered the thing mightily and my father, perhaps somewhat too eagerly, completely relinquished the role of Chief BBQ Chef.  I don’t think he ever used the new grill, but they often BBQd together and with family.

Barbecuing became my mother’s erev-Shabbos thing in the summer:  toss some chicken (or whatever) in, flip it, turn the thing off, and you’ve got perfectly-done food, and as a bonus, it didn’t heat the house up.

And the family BBQs:  We’d always had them, but more than ever, it became my mother’s opportunity to shine, to show off her backyard, her family, to sit around drinking beer.  For the record, I don’t drink beer, but approve of it in my family because we’re generally pretty strange, uptight people.

So, wow, this is getting way longer than I thought it would, so I’ll sum up:  my father’s gone, my mother’s fixing up the house bit by bit to make it her own.  She’s changing things around in the business to make it her own also.  And so, I think, she needs a BBQ of her own.  Brand-new, no kashering, no history.

So she can start having BBQs for one if she wants (I want to choose something that is easy to use so she won’t say it’s “just her” and not use it!), or for family gatherings… like saying her family is still around for her, even though Daddy’s gone.

(Is that too much for one appliance to say?)

I hope to go pick one out on Sunday.  I emailed her brother and he and his ~ahem~ girlfriend (okay, YES, I think it’s weird to call her a “girlfriend” when he’s 70) chipped in quite a bit.  My father’s sister is also contributing something.  I think they’re all a bit grateful that I thought of something, and I think it will suit her well.

(I’d love to get her a Weber Q, because they offer a great combination of flexiblity, ease of use and capacity to serve larger crowds if necessary… but I think it’s too expensive.  Sigh.  And I don’t think she’d go for a Weber charcoal, even though they are the cadillac of charcoal grills, just because of all the aforementioned nonsense with charcoal.)

My sisters will probably pay something, though I haven’t heard back from Sara, who’s in the midst of her summer of indentured (but theoretically WiFi enabled) servitude up in Muskoka somewhere.

Of course, at Abigail’s suggestion, I’m keeping the receipt, so my mother can micromanage if necessary and take the whole thing back for exchange or credit or whatever.