{Postscript: Raspberry lust was eventually requited in this post!!!} 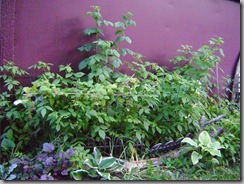 One last garden post before I turn in. I’m getting a hankering for razzzberries (aka raspberries, just to keep this post searchable). I cannot believe how wild and overgrown this patch has gotten. I put in some dollar-store trellises to restrain the vines so the berries don’t flop on the ground.

I think they’re late this year because of our long cool spring, but the berries are fully-formed now and hopefully will start to redden with a few warm days. Because I’d hate to miss the fall crop if this one comes in late…

Speaking of “redden” – aargh. The baby seems to think he can pick any old strawberry he sees growing: even the white ones! :-o I tried to stop him this morning, but when I turned around, he said “No” and then picked one. Tried to eat it, but then even he spat it out. They really aren’t ready when they’re white!!! 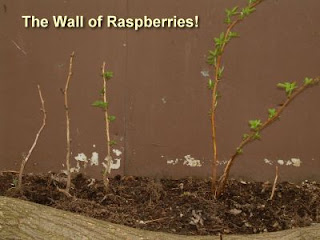 Here’s a picture of the same “wall of raspberries” taken both when the wall was brown (before our insurance required Ted to attack the garage with a can of Barney-coloured paint) and when the raspberries were tiny. The five canes here were what I started with: 3 from Home Depot (expensive) and 2 from a guy at the Riverdale Farm farmers’ market (cheap) who swore they were his grandfather’s raspberries.

I suspect it is Grampa’s Berries that have taken over the entire place. Next spring is the year I have to get tough and start pulling up canes that grow where I don’t want them. Otherwise, we’ll have a yard full of raspberries this time next year.

I wonder if raspberries grow in Israel?